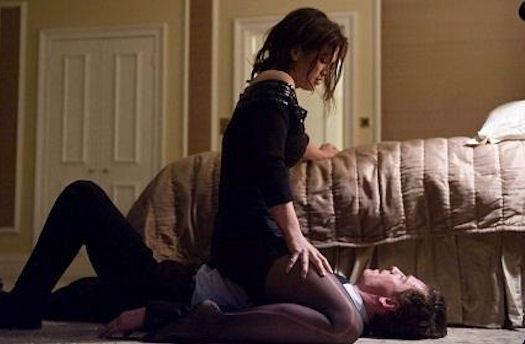 I finally got to see a fantasy come true in Haywire.  No, not being slack-jawed at Gina Carano’s thighs being put to amazing use.  Rather I finally got to see Ewan McGregor get beaten to a bloody pulp and drowned.  It was satisfying, but having to sit through 8 hours of monotonous shit, I’m not sure it was worth it.  Wait, Haywire only lasts 90 minutes.  It felt like 8 hours, anyway.  It goes on and on.  And on.  Yet arrives nowhere.  It has one trick:  Gina Carano beating the shit out of people, something that feels forced and gimmicky.  The rest is pretty diabolical espionage with A-Listers forgetting their lines.  Maybe it’s because I watched this back to back with The Bourne Legacy, an underrated and superior movie from the same genre, but Haywire is a flat yawnfest.

A good spy yarn should be authentic.  So in Haywire, why is Carano spilling all to a random guy in a car – the names of international agents, their whereabouts, everything.  Now, y’see, when Bourne was guilty of doing the same thing – he had the excuse of a head injury and amnesia.  Carano’s excuse must be weemin gossip, sometimes they just can’t help it.  Maybe this is why women don’t fill out the the majority rank of secret agents?

The acting doesn’t help either.  Channing Tatum is a poor actor.  Gina Carano is worse, probably the worst actress I have ever seen.  So when you have these two discussing international espionage, it kinda kills the moment when Tatum mumbles nonsense like Rocky and Carano is concentrating real hard on what the next line of dialogue is.  But don’t worry, turns out the overall story is shit, so they had nothing of any real substance to relay anyway.  Carano isn’t the only one who struggles with the dialogue.  Michael Douglas too. As soon as I saw that dirty old bastard in this movie, I drew the immediate suspicion that he was there to pursue an affair with the lead actress, who (kinda) looks like a younger version of his wife. I’m sory but this was my first, real, inclination.

The Thighs That Loved Me

Haywire is a shit spy thriller.  So then, we look to it as an action thriller for salvation.  But it’s not much of an action thriller either.  Its one trick and gimmick is Carano beating the shit out of men and like I said earlier, it feels forced.  It’s like the movie is built around it.  Okay, we get it, a woman kicking ass.  The rest of the film is a product of the fight scenes, rather than the fight scenes being a product of the story.  It would’ve helped though if Carano had more charisma than an empty water bottle.

Even in a tender moment, mourning the death of someone, Carano is shockingly stone-faced and a picture of rigidity. But back to the action.  Closer to the end, as a fugitive Carano runs into a roadblock in a snowy and iced backwood area of the country.  Great, I thought, a chase scene.  Now in that type of terrain and weather, few land-based vehicles on this earth will catch or even keep pace with a Mitsubishi Lancer Evolution 4×4.  Its very automotive DNA was moulded by that kind of ground.  But the chase sequence is over before it begins, with the car being stuck in a ditch.  Women drivers.

All the suspense and intrigue of eating a bowl of oats.  Extra points though, for the forceful drowning of Ewan McGregor.