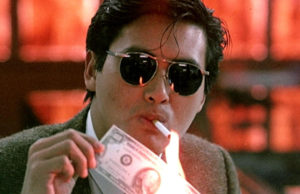 In Hong Kong circa 1986, gangsters Sung Tse-Ho (Ti Lung) and Mark (Chow Yun-Fat) are best friends. Ho’s younger brother Sung Tse-Kit (Leslie Cheung), to whom he is quite close with as well, wants to be a police officer, unaware that his brother is a criminal. In an unfortunate series of events, Ho is double-crossed during a set-up and turns himself in to the police, while Mark gets injured in retribution. Kit’s reputation is tarnished as a result of Ho’s arrest. Sometime later, a reformed Ho is released from prison and tries to reconcile with Kit, whom he is now estranged with, but the ties to his former gang are difficult to break.

This is a piece of film history – the one that put John Woo and Chow Yun-Fat on the HK Cinema map. Most interestingly, this was arguably where the “heroic bloodshed” genre started, where brothers on opposite sides of the law are forced to face one another and/or team up, often with violent and melodramatic results. Has it really been 30 years since this HK classic first wowed audiences? The trench-coats, sunglasses, cigarettes… I mean, this movie was the one that started an entire fashion trend among the youths in Hong Kong. Just goes to show how big of an impact this film had in the Hong Kong Film Industry, let alone action cinema history.

All three leads perform well with their given roles, remarkable considering John Woo’s knack for overblown melodrama is both his biggest strength and his Achilles’ heel. While Lung and Cheung are quite excellent as the conflicted brothers on opposite sides, it is Chow who, as usual, steals the show as a part-comedic, mostly-lunatic gangster who blows bad guys with a Beretta in each hand, seemingly always with unlimited ammo. Lots of bullets hit flesh, things explode in sparks and blood. It’s a John Woo film, after all. It even has a favourite trope of mine, the climactic nighttime-at-the-docks sequence where stuff goes down in a hail of bullets and buckets of gasoline. It may be too stylized for some action aficionados looking for something grounded in grit as per Lam’s or To’s entries, but, again, this is John Woo we’re dealing with here.

Although dated in terms of melodrama (which seems truly cheesy when compared to both today’s gritty entries by David Ayer or South Korean cinema, as well as the classic film/neo-noirs of Hollywood), Woo’s film remains a seminal staple and landmark in action film history, not only for introducing the dream star-director team that is John Woo and Chow Yun-Fat, but also for creating a whole new genre that influenced future Hollywood productions made from the likes of Quentin Tarantino, Robert Rodriguez, the Wachowskis, and even Walter Hill.