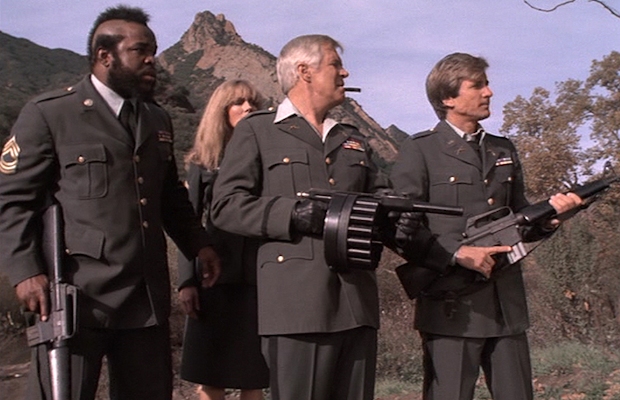 It has long since been a demand of ManlyMovie, now it also looks to be an answered prayer.  After Airwolf came to Blu-Ray, now the original A-Team series is on its way too courtesy of our friends over at Fabulous Films.  Not only is it damn good, but we have 1X set to give away to our readers in the United Kingdom.  The first to request it via jordan@manlymovie.net will be the lucky son of a gun!

Don’t forget to include your name and postal address and remember that this offer only applies to residents of the United Kingdom!

The box set will include every episode and release in the United Kingdom on October 17th.  Thus far it seems to only be a PAL/R2 release at £149.  This series was remastered from the original 35mm print.

Check out the press release below, along with artwork.

“In 1972, a crack commando unit was sent to prison by a military court for a crime they didn’t commit. These men promptly escaped from a maximum security stockade to the Los Angeles underground. Today, still wanted by the government, they survive as soldiers of fortune. If you have a problem, if no one else can help, and if you can find them, maybe you can hire… the A-Team.”

Join B.A, Hannibal, Murdock and Face in all 97 episodes from 5 seasons of the groundbreaking show, now fully restored and in Hi-Definition… in this action-packed 22-disc Blu-ray set!

It’s not a secret that Mr. T and George Peppard did not get along. Arguments were fed by the fact that Mr. T became the real star of the show, despite Peppard being a ‘proper movie actor’. Things got even worse when Peppard learned that Mr. T was paid more than he was. According to Dirk Benedict, George Peppard refused to talk to Mr. T and would use Benedict as a messenger between them. Peppard would only refer to Mr. T as “the man with the gold”. BA was named after British Airways, owing to his love of aviation.

Singing like a canary once again, Dirk Benedict has said Robert Vaughn was added to the cast in season 5 because of his friendship with the notoriously difficult Peppard. It was hoped that Vaughn would help ease worsening tensions on set.

NBC executives originally wanted the character of Murdock to be removed from the show because they felt that he was too over-the-top. But test audiences for the pilot loved Murdock and gave him the highest ratings. This can’t have pleased Peppard. The executives had to relent.

During the entire series, only five people died on-screen even though almost every single episode involved horrific car crashes. The people driving these vehicles invariably were shown getting out afterward, unscathed. According to Stephen J. Cannell, this was a running gag with the writers testing the limits of realism.

Composer Mike Post created the theme tune to The A Team along with among other TV classics Magnum P.I., Greatest American Hero (which reached #2 on the Billboard Hot 100), ChiPs, Quantum Leap and Hill St Blues. Post has made it known several times that the theme to The A Team is very close in rhythm to “Zip-A-Dee-Doo-Dah,” from the 1946 Walt Disney film Song of the South.

The crime they didn’t commit…during the Vietnam War, the A-Team’s commanding officer, Colonel Morrison, gave them orders to rob the Bank of Hanoi to help bring the war to an end. They succeeded in their mission, but on their return to base four days after the end of the war, they discovered that Morrison had been killed by the Viet Cong, and that his headquarters had been burned to the ground. This meant that the proof that the A-Team members were acting under orders had been destroyed. They were arrested, and imprisoned at Fort Bragg, from which they quickly escaped before standing trial.

Face is played by Tim Dunigan in the pilot. The role was soon recast with Dirk Benedict because Dunigan was deemed “too young and too tall.” According to Dunigan the team was supposed to be made up of Vietnam veterans, and the Vietnam War ended during his sophomore year of high school. In fact series creators Frank Lupo and Stephen J. Cannell had wanted Benedict from the start, but were, in the beginning, overridden by the network executives.

• Rumours of Soldiers of Fortune: Interview with Stephen J. Cannell