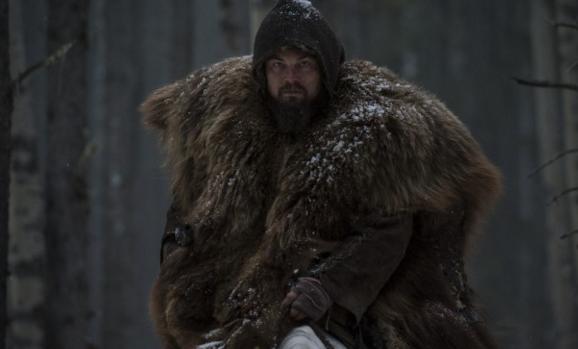 It looks like we’re looking at the manliest movie of the year with The Revenant, a movie that is all that it’s cracked up to be.  This film is a feast for the eyes and ears, it’s a bleeding-red meat steak of a manly movie, but man, is it even better on UHD 4K Blu-Ray, which I looked at this week.  To me, the debate settler for another question regarding 4K – is it all it’s cracked up to be?

Man, wilderness, treachery, revenge. Fine elements for a manly movie, various combinations of this have worked over the years. Seraphim Falls, The Edge, Man in the Wilderness, Death Hunt and now The Revenant, probably the best entry into the genre yet. A group of frontiersmen are hounded onto the back foot in 1820s America by native warriors. Among them is (Hugh Glass) Leonardo DiCaprio and (John Fitzgerald) Tom Hardy. When Glass is mauled by a bear, Fitzgerald not only ultimately leaves Glass for dead but crosses the man’s family, a half-caste Indian boy belonging to Glass.

I don’t know much about director Alejandro González Iñárritu, but I feel that the man needs to be watched with a closer eye from here on out.  His film is a picture of stunning immersion, he’s a man who apparently considers having a movie look good to not be enough.  Many directors can make a movie look good, but real auteurs invoke complete atmosphere, the tingling of senses.  We’re in a hyper real world here.

After watching The Expendables 3 in 4K, I was pleased with the new format but quickly perturbed to find that both Ghostbusters and Ghostbusters II look awful, I started to second guess the point of our latest leap and if we’re really going through some type of placebo effect.  Then The Revenant settled doubts and again worries the old 1080p generation with its massively powerful and immersive picture.  It’s hard to articulate how the forests and scenery look in this movie, or how the room can almost change temperature through the high dynamic range variations, combined through the methods this director has realized.  It puts you one-step closer to a sort of (2D) virtual reality, with the stitches on clothes standing out and the breath coming from mouths looking eerily realistic.  So far, the bar has been raised for me with this movie.  It just leaves me wanting more.

The DTS-HD soundtrack also adds to the experience, subtle when it’s quiet and violent when it needs to be.  It puts you in the moment that bit more and I imagine that those working 7.2 systems will only be more impressed.  On the downside, I can’t give this release a 10 because of the lack of supplements in 4K (in fact, there are none), although there are around 50 minutes of extras on the 1080p disc, but unfortunately those, such as the making of, were released officially to YouTube.  But so far this could be my favourite home release of 2016.