REVIEW: The Siege Of Jadotville (2016) – ManlyMovie 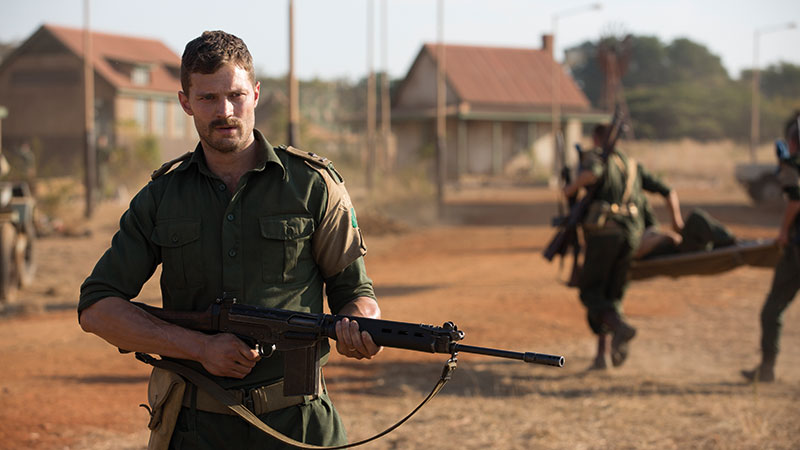 This is one of those war movies that will eventually pop up in various ‘underrated’ lists years from now, one of those types of movies that are really good, but underexposed.  Well since it has just been released (and produced) by Netflix, now is your chance to catch on time.  It’s a good war movie, very well paced and very well directed.  A fun ride but not exhausting because of stupid camera shaking.  I think it’s also the first movie ever made about the Irish military in combat.

The film tells the story of  A Company (led by Jamie Dornan) of the Irish Army that was sent to the Congo as part of a United Nations contingent during the Katanga conflict in 1961.  The 150 troops came under attack by forces loyal to Prime Minister Moise Tshombe, led by hardened French mercenaries.  They held out for six days without losing a single man, killing 300 and wounding 1,000.  Controversy arose and is covered throughout the movie, about the UN’s refusal to relieve the troops, through fear of escalating the Cold War as the Katanga region and Tshombe were increasingly moving to the fore of U.S./Soviet tensions, mostly because of the vast resources of the area.

Although the movie is making a statement, it’s primarily a battle movie.  And we like that kind of thing, so there are no complaints here.  After some opening cliches settle us in, it’s not long before the Irish troops are enduring their Zulu Dawn, repulsing what are essentially human waves and government-ordered airstrikes.  And here’s a cool thing about this, before I watched this movie and even after it had finished, I had completely forgotten about HESC (Hyper Edited Shaking Camera) syndrome.  Are we entering the post-HESC era?  Are directors finally afraid to cheat us with this bullshit?

Because in this movie, although the camera vibrates here and there, like you might have seen in Saving Private Ryan, everything is quite lucid and clear, the action really gets you going.  With good pacing too, the movie is savvy enough to slow things down every now and again, lest we become exhausted.  In war and action movies, I’m also a big fan of good gun reports and I really like the job they’ve done here — different calibres present different bass thuds, it’s a small kind of thing that helps draw you in.

Of course, this movie also vindicates the Irish soldiers, who were not awarded medals for bravery at the time because it was not politically expedient.  The traitors in power even went so far as to call them cowards, although it was most certainly they who were at fault for not sending a proper relief force; although the smaller contingent of Irish and Swedish UN troops did their best to try and force a breakout against superior numbers.  Only in 2005 were they awarded the medals that they deserved.  I think the movie fumbles though, with this stuff.  I mean if you aren’t aware what this conflict was about, this movie doesn’t do a helluva good job explaining it.  ‘We don’t want to risk WW3’ is the repeated message, but reasoning isn’t presented along with it.  Maybe some circles still want to keep their cowardly fear of the Soviets quiet, even now.  You’re probably going to want to check the Wikipedia article in full before watching.

In closing, I actually think The Siege of Jadotville is the best war movie of 2016, unless I’m seriously forgetting something.  Richie Smith is a good director and Netflix have made it look like 50 million bucks.