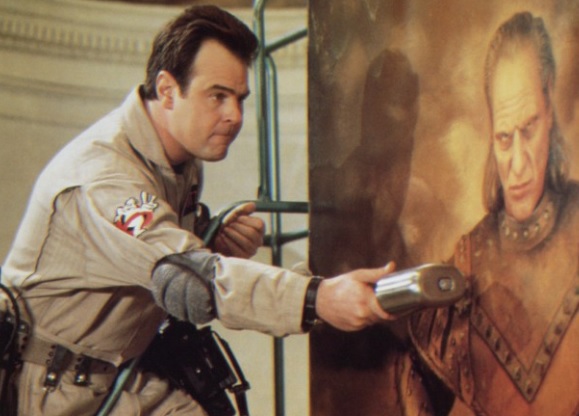 There are a few different ways of mastering a 4K ultra high definition movie.  One is to film it in 4K digital, or upscale it from 2K digital, the latter being a popular format in the ’00s but not exactly future-proof as they have found with Mad Max: Fury Road.  Upscaling is never good.  Another way is to pull it from the original 35mm print if that’s how it was filmed, in theory you can get a resolution well beyond 4K but in practice the film may have aged.  In future, we’re all going to be keeping an eye out for our favourite older movies on 4K Blu-Ray.  The question is, how will they fare?  Ghostbusters II is my first experience and it’s not good.

First of all, the movie.  I’ve always liked Ghostbusters II.  If I were to blaspheme for a minute, I’d say I like it just as much as the first movie.  The movie sees the team now with Rick Moranis in tow (whatever happened to that guy?!) take on a medieval deity that has manifested itself halfway back into our current realm.  Vigo the Carpathian wants to rule the damned world, but needs Sigourney Weaver’s baby to possess so that he might make himself a God on earth.  Of course Venkman and Co. are there to blast him with their proton packs and deadpan put downs.

What’s cool about this movie for my money, is the villain.  As a child, this one, played by Wilhelm Von Homburg, kinda freaked me out –the actor in real life allegedly raped his own stepmother — maybe there was something evil in those eyes.  And Bill Murray’s troll-ish, easygoing presence didn’t help like it should have.  That’s a good thing, the fact that Ghostbusters II is darker than the original.  Even though the ending kind of jumps the shark with the whole Statue of Liberty thing, I really did enjoy revisiting this movie. I mean the humour is still there, with Rick Moranis’ bumbling court defence being a highlight of the movie. ‘Short but… pointless’, class dialogue.  It’s been so long since I’ve seen it, for me the movie is an 8/10 deal.

Unfortunately for the 4K era, Ghostbusters II lets the retro side down.  Now I’ve looked at reviews for this movie elsewhere and the transfer is getting praise – mind you, it’s also generating some strongly heated threads on AV Forums.  But this praise to me is baffling, since this is not becoming of 4K.  If you were to run a test on someone watching this and the 1080p version without telling them which one they were looking at, I’d guess they couldn’t tell the difference.  It’s nice, there’s no doubt about it.  But we’re not buying these discs for ‘nice’ or cool looking high definition.

In some places, it’s not even impressive for 1080p standard.  It’ just flat, lazy and weathered and I feel a bit conned by this release.  Something else of note by the way, the first movie, which I also watched (but decided to review this one instead because people talk about it less) is even worse, even by latter era Blu-Ray standards it’s not all that.

Now obviously these are old movies, especially when we consider that the first movie is going back to the early to mid-80’s and some people will charge me with being ‘too picky’ or possibly not having a calibrated set or TV.  Well my TV is just fine, a new panel released by Sony in September, full 4K/HDR with rave reviews and properly calibrated and when playing the likes of Sicario or The Revenant, it shows.

I’ve also adjusted my expectations and taken aging into account but can only conclude that if you can barely discern the difference between this and the old release then they should simply not have released it.  An upside is that I feel that the movie benefits somewhat from high dynamic range, insofar as the colours look somewhat more vibrant than the 1080p release.  This release includes the 1080p disc along with the original HD extras, but they only amount to less than half an hour and some of them are in SD, if you can believe it.

In conclusion, we’re not off to a good start, I would hope that this isn’t indicative of future 4K retro releases or problems with aging 35mm prints, but I suppose with Mad Max and Dawn of the Dead coming in the next few months, we’ll have a much better lay of the land.