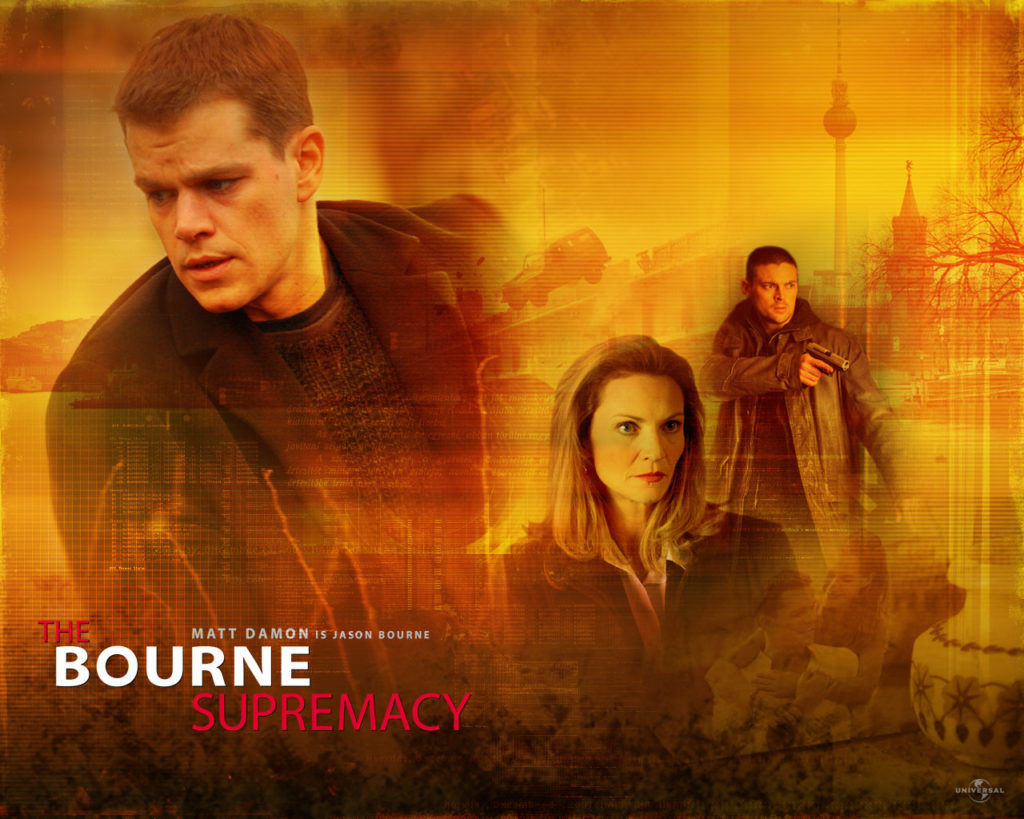 This ‘Bourne’ stuff has been going for a while now, around 15 years, although that obviously doesn’t include the novels or the 1980’s TV movie (The Bourne Identity – the first incarnation).  Having been released at least once on Blu-Ray, the movies are all now headed to 4K UHD Blu-Ray this month.  The next movie in this series I’m reviewing is Ultimatum, but today I’m reviewing Supremacy.

The Bourne Supremacy is another adaptation of one of the Ludlum novels and although it shares the same title of the novel of the same name, the premise is starkly different.  Tony Gilroy brings us the altered story, with Bourne now seeking revenge and closure, with Paul Greengrass entering the series for the first time as director.  On the run, Jason Bourne (Matt Damon) turns the tables on his pissant plutocratic creeps after they kill his woman.  Obviously, location hopping is a theme here to both give the movie variety and add some commentary about the tentacles of a certain intelligence apparatus and how far they extend.

Supremacy is similar to the first movie in most respects.  There are a lot of control rooms with panicked supervisors wondering where the rogue assassin is, a lot of cameras hijacked to try and spot him and the usual plot device of dispatching other assassins to take Bourne down.

I feel the film is pretty damned good.  I love anti-establishment cynicism and these movies were doing that long before it was en vogue.  If you sense your own government is scum at levels that don’t even bare thinking about, it’s simply more fun to see a de-facto human Terminator make them shit their pants than to see someone serve the same people in a different movie.  The first movie is marginally better though because it has kind of already done what this movie brings to the table, most of it anyway.

A minus point is Greengrass’ jarring directing.  It’s one thing to pound the senses of the viewer in an action scene with camera shaking and hyper editing, but it’s another thing entirely when it becomes senseless, or unintelligible.  One of the reasons I liked Legacy was that it kind of ironed out the manic action in the two movies that came before it.  But all the same, Supremacy is the second best movie in this series and honestly, shouldn’t be missed.

Oh and one thing that really helps this movie is Brian Cox, I fucking love that guy when he’s playing a villain.  Karl Urban is also cooler than cool as the chief assassin in this movie, as good as Clive Owen’s ‘Surgeon’ from the first, a big bonus.

In my review of Identity I found that the ‘4K’ picture quality was wanting.  Most of the time it was like I wasn’t looking at a 4K movie at all, rather a standard 1080p movie with some impressive contrast here and there.  There is some confusion and speculation about what is going on here.  Some have the second and third movies (Amazon, at one point, I believe?) being stuck at a 2K digital source, with the 1st movie on 35mm film.  Others say it’s the opposite.

I say, I can’t tell the difference, because Supremacy is just as disappointing as Identity.  And how far back do we have to go to use the ‘it’s an old movie’ excuse, like Ghostbusters II in 4K?  This isn’t an old movie and once again, for example, if we look at human faces close up in this movie (when Greengrass’ cameras hold steady), it’s decidedly flat and lazy.  And maybe I’m imagining things but there appears to be somewhat more grain on this picture compared to Identity, so you’re getting a tired picture quarterbacked by grain… which makes it the bad type of grain if that makes sense.

In this movie to my eyes, it’s kind of spot the 4K reference material.  Because sometimes you can identify brief images and scenes that clearly look superior to anything from the old generation, but in a two hour movie is this really acceptable?  All I can say is that if you own this movie in 1080p Blu-Ray, I really wouldn’t bother.  Another thing that bothers me is that many years ago, I bought these movies when they first released on Blu-Ray.  At the time Universal had a new menu animation, the brushed steel look.  It’s still here for this UHD release… I just couldn’t help but think that they should have updated that, it makes it look like they aren’t really bothering, you know?

Like the previous release, this also comes with the 1080p movie on a second disc, so if you don’t own that already then one way or the other, this should be the version you buy.  That includes the old features such as deleted scenes, director’s commentary and behind the scenes material such as the creation of that bone-wrecking chase through Moscow.  As well, you get the usual mobile download code.