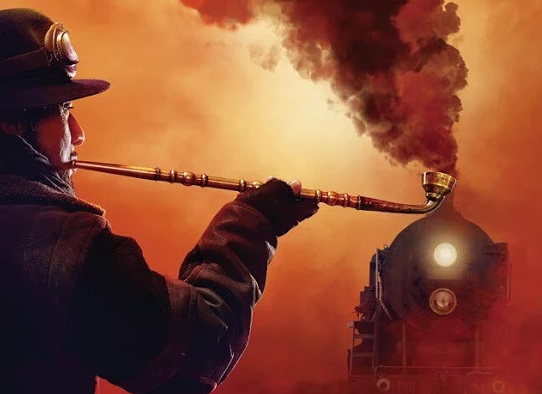 Early last year, Jackie Chan had a sizzle reel of sorts, teasing his four upcoming projects: Skiptrace, Railroad Tigers, Kung Fu Yoga, and (the one I’m really looking forward to) The Foreigner. Of the four, Tigers seemed to be the biggest in scale and scope, focusing on WWII-era railroad workers and thieves who rally together to blow up a bridge to cut off crucial Japanese supplies, Guns of Navarone style. Alas, that would not be the case, as it is also a very muddled film.

One of the few things that irked me about this film is that it is tone-deaf. One minute, R-rated violence and stunts involving lots of locomotives and a lot more bullets occur, but with the delivery of Chan’s usual slapstick martial arts. Who is this film aimed for, kids or adults? I’ll use three scenes as an example: one where a Japanese soldier gets brutally impaled with visible blood, but immediately after says in a cartoonish tone “ow, that hurts!” Another scene involves a good guy supporting character who is shot up, but the scene is so messily directed and edited, the audience I was with burst into laughter instead of tears. The final one involves the Japanese head baddie who starts off as intimidating but ends up as a silly caricature of himself in an overdone fashion – capped off with him being a total jackass once drugged with spiked pies in order for a rescue mission to proceed. Filmmakers in the past have melded big-scale war action and physical comedy together to a much larger degree of success (Kelly’s Heroes), but director Ding Sheng (Police Story: Lockdown) here tries too hard to accommodate WWII heroics with Chan’s comedic antics, instead creating a never-ending train of jarring awkwardness.

As for Chan himself, he is fine here but – save for a scene involving physical comedy and pulley strings – does not do a lot of the stunts as opposed to his earlier Skiptrace. Instead, he’s barely the anchor of the film as a majority of the film focuses too little on Chan and too much on the ensemble involved with the mission, i.e. young up-and-coming Chinese actors (including Jackie’s own troubled son Jaycee) who are riding on Chan’s name in the hopes of fame and fortune. Although they are not as annoying as they can be, I paid to see Chan, not these unknowns. The film also opens and closes in a present-day museum, rendering the entire film as a flashback showing the resilience of the Chinese people. Some call it propaganda, I call it lazy. Also, the annoyingly unwelcome character titles that opened Skiptrace return here in abundance, as they introduce about 20 or more characters (I lost count). It sort of all comes together in a 35-minute climax comprised of nothing but stunts and explosions, but by then most of the damage had already been done. Also, what is up with the god-awful Tom & Jerry-lite music throughout this film?

If you choose to endure this film then there is indeed some good stuff to be had here. There’s some good cinematography here as locomotive enthusiasts may get a kick in how the trains are shot amidst the panoramic Chinese vistas, and there’s a surprising lack of CGI compared to most Chinese action films nowadays. Chan, for his lack of screentime, is always fun and still gives his character his all. However, they compensate little for the massive wasted opportunity this film had.