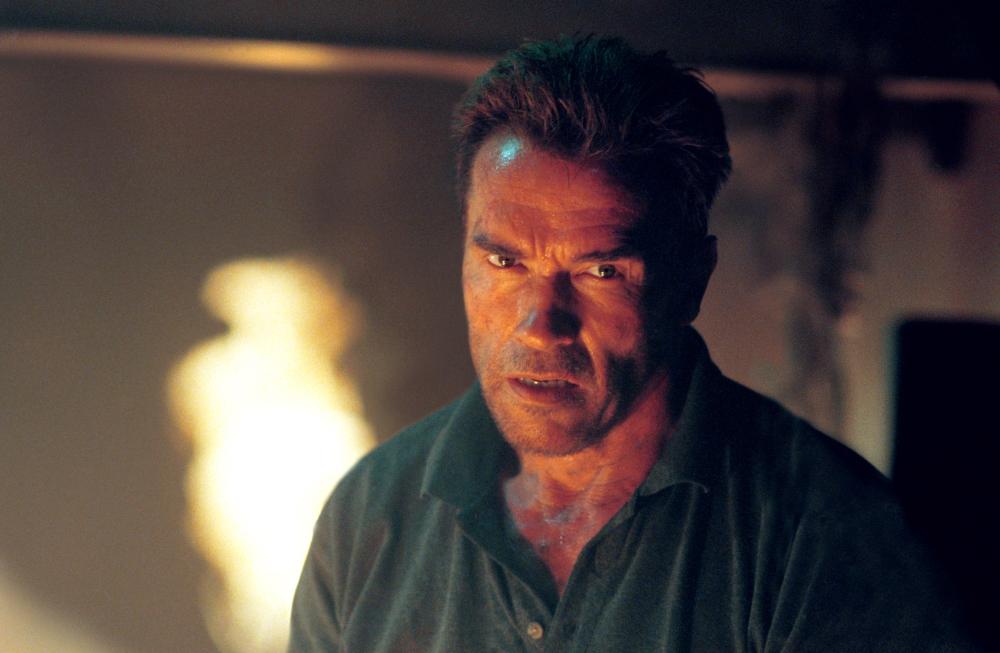 It was not a good time for neither Arnold Schwarzenegger’s movie career nor America as a whole when this film was first released 15 years ago. The film’s plot revolved around a firefighter’s vengeance against Colombian terrorists who took the lives of his wife and child in an attack on home soil (kind of like Jackie Chan’s upcoming The Foreigner). The 9/11 attacks postponed the initial release of this film for a good four months, giving time for the filmmakers to re-write, re-shoot and remove certain plot points deemed too sensitive for American moviegoers at the time: for example, a scene involving a young Sofia Vergara hijacking a plane was omitted entirely.

As a result, the film quietly opened in a February 2002 release and suffered to indifferent critical reception and tepid box-office numbers, not even reaching the US$100 million dollar mark globally. Among many Schwarzenegger fans, the film has an infamous reputation as a mediocre entry, citing a lack of Arnold’s trademark one-liners and far more restrained action than his earlier over-the-top action spectacles as some reasons. Having caught the film recently on TV, I felt it was time to answer the question: was this really as mediocre as people are saying it is?

The film centers on Los Angeles firefighter Captain Gordon “Gordy” Brewer (Schwarzenegger), who takes his wife and son out for the usual family excursion. It is to their misfortune that their eatery is located at the Colombian Consulate, which is targeted by Colombian Terrorist Claudio Perrini (Cliff Curtis, Live Free or Die Hard), or El Lobo “The Wolf” as he apparently calls himself. The Wolf, who also sometimes kills his enemies by shoving down live snakes down their throats, blows up the place and kills numerous intelligence agents and civilians alike, including Gordy’s family, though Gordy himself survives the blast. Grief-stricken and frustrated by the political red tape revolving around the investigation, Gordy himself travels to Colombia to personally make The Wolf pay.

The film suffers from a few pacing problems, specifically once Gordy pushes his way into Colombia as he searches for more information on The Wolf. Juicy side characters, whom I’d like to see more of, come and go without so much as a niggle on the main story, such as a Canadian mechanic (John Turturro, The Big Lebowski) and a cocky drug lord (John Leguizamo, John Wick); though perhaps the jerkish CIA Special Agent played by Elias Koteas somewhat makes up for it, but not nearly enough. Perhaps the lesser dramatic bits are the ones involving The Wolf’s own wife (Italian beauty Francesca Neri) and kid, whose attempt at character development (the whole violence-is-a-vicious-cycle-kind-of-cliché) kind of bogs the whole thing down until the end of the Colombian story arc. Also, the music sounds somewhat cheap for this kind of material.

However, the film has two strong things that makes it far better than initially expected. Arnold Schwarzenegger himself delivers one of the better “straight” performances of his career, with nary a one-liner in sight. This is perhaps the first time we see Arnold actually act his heart out; when he grieves for his family, he doesn’t look like a caricature, he looks and sounds like a man who really did lose everything. This may turn off a lot of fans anticipating a wanton amount of vengeance from the Oak (and to the audience, perhaps a little too soon considering the real-world events five months before this movie’s theatrical release), but his character was written as an everyday firefighter, not some gung-ho commando, though why a large-built American firefighter with a suspect Austrian accent enters the area remarkably easily while not being caught by Colombian guerrillas until midway through the film is another question entirely. When he trips up, he realistically gets caught by enemy forces and has to rely on his survival skills to save his own neck. It isn’t until the big finale where his firefighting skills are put to somewhat exaggerated yet heroic use in defeating the villains. There’s even a scene where he falls down a jungle trench while hiding from guerrillas, in an obvious nod to Predator.

The other major strength this film has going for it is its direction by Andrew Davis, a crisp action filmmaker who has performed a great service to fans of Manly Movies by delivering two of the best Steven Seagal films (Above the Law, Under Siege), the best Chuck Norris film (Code of Silence), one of the best Harrison Ford films (The Fugitive), and a criminally overlooked Gene Hackman film (The Package). All of those films had larger-than-life heroes grounded in plausible yet large-scale action sequences that are well-shot and smoothly edited, and Collateral Damage is no exception. Davis forces his heroes to go above what is required of them and somehow makes it work, even if the action does go a bit over-the-top at times. It’s his gift, and while Collateral Damage doesn’t rise to the level of his best material, it doesn’t go below it either, even finishing the film off with quite the satisfying finale after a surprisingly effective plot twist.

Perhaps the film has grown on me over the past few years, or that the massive lack of quality from mainstream cineplexes nowadays have certainly made this film to be far better than it actually intended to. It certainly isn’t neither Davis’ nor Arnold’s best efforts, and there may be a lot of people who still hold their opinion that this film is below average, but personally I did not find the film mediocre at all despite its flaws. There’s enough legitimate engaging material to fuel two or three decent pictures, and while some may find a bit of controversy with its content – specifically its finale where a child is almost used as a Trojan Horse – I’d like to remind them that there’s a lot more truth to that in the real world especially today, sometimes far more worse. Terrorism is never cute, and Davis here remarkably makes that fact loud and clear despite having a revenge-fantasy plot that threatens to derail the film, but never does.

This was also probably one of the last mainstream R-rated action hero studio films, if not the last. Later in the year, both The Bourne Identity and Spider-Man were released to massive popularity. For better and for worse, action cinema has rarely been the same since.