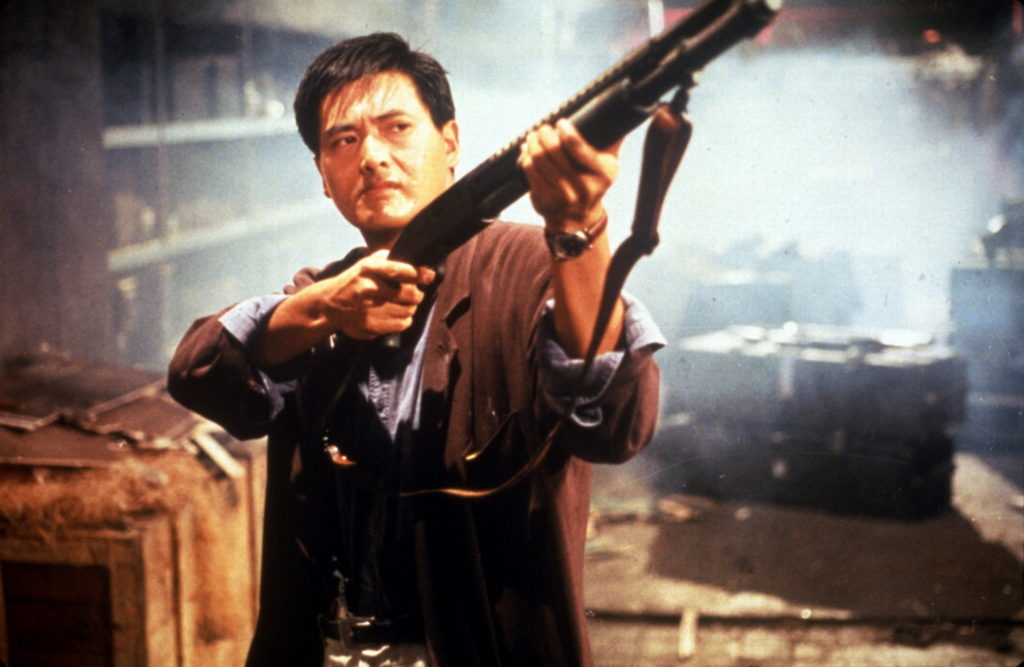 The year was 1992, 25 years ago. John Woo was prepping for his (temporary, as it would turn out) migration to the United States, perhaps feeling a bit jaded with experiences in editing 1989’s masterpiece The Killer and the commercial reception of his 1990 passion project Bullet in the Head. 1991’s Once a Thief was a commercial hit, but it was much less Woo, and much more Stephen-Chow-like, sort of. Woo felt that it was time for a change of scenery, but he had one last gift to give to Hong Kong.

In a direct rebuttal to his critics for claiming he had glamorized the Triads in his Better Tomorrow films, Woo decided to make a film glamorizing the Hong Kong police, with the Chinese equivalent of Dirty Harry Callahan as its hero. The English name for the film would be Hard Boiled, but in Chinese, it is known as Laat Sau San Taam, literally translated into Hot-Handed God of Cops. Who better to portray the jazz-loving, toothpick-chewing, gung-ho, cool-as-all-hell supercop Inspector “Tequila” Yuen than the great Chow Yun-Fat?

We all know the scoop. The plot is just a shoestring for the action sequences. Hong Kong 1992 has a gun problem. Nasty mobsters are smuggling illegal weapons into the city, in the hopes of waging war with the cops. However, rival gangs are facing a turf war. Tough-as-nails Inspector Tequila, having recently lost his partner in a teahouse bust, sets out to eliminate the scumbags with help from inside man Alan (Tony Leung Chiu Wai). However, gang leader Johnny Wong (Anthony Wong) and his right-hand man Mad Dog (Phillip Kwok) have other plans…

In my years of movie watching rarely, if ever, has there been a movie that revels in being over-the-top with much relish. Dual pistols are firing away. Pump shotguns flare up, hell, automatic shotguns are flared up. Uzis and machine guns spray away. Millions of bullets are fired without anyone reloading. Bodies are bloodily riddled with bullets. Cars explode. Bikes explode. Bodies are flung in the air. Bikes explode mid-air. Bombs explode. An entire hospital explodes. A body count over 300. Chow Yun-Fat firing two pistols at once while partially sliding down a staircase. (A little anecdote: production notes state that all firearms used in the film were actual weapons filled with blanks, and not movie props, with over 100,000 rounds of blank ammunition fired over the course of filming of this film.)

It’s all gloriously ridiculous. None of it is supposed to make any physical sense. And yet… all of this is done with such high style and explosive energy, once can only watch in awe and cheer as Master Woo gracefully and elegantly crafts one sensational action sequence after another… Like fellow action greats John McTiernan and George Miller, Woo is a maestro of intense violent action, a man who knows action momentum like the back of his hand and floors it completely, with precise, fluid editing, perfect slo-mo, and crisp cinematography to allow the audience to savour each and every moment to its fullest. I envy those who saw this film in theaters, I would’ve loved to experience the reactions during the 30-minute finale in the hospital. No PG-13 quick-smash-cutting away from the bloodshed. No shaky cam. No CGI. No characters pondering about whether killing is wrong. No costumed superheroes. Michael Bay, Joss Whedon and all the other so-called action filmmakers of the 2000s onwards can only wish they made action this fucking good. There’s even a cool, often jazzy soundtrack by Michael Gibbs being put to good use throughout.

Chow is in his element here as Yuen, the John McClane-esque wise-cracking supercop who takes no prisoners and risks his badge just to eliminate the gun-runners. There are a few actors who can command a scene just by a twitch of the eye, and Chow is one of them. Never mind that he has a manly-as-fuck entrance during the middle action sequence in a warehouse, he basically commands the entire show as Woo pits him against one outrageous set-piece after another. In fact, so good is he, I nearly forgot the good acting work put in by Leung as the undercover inside man and sidekick, a trait Leung would later reprise more memorably in the 2002 hit Infernal Affairs. A special mention goes out to Kwok (who also choreographed the action sequences) as the eyepatch toting Mad Dog, a character who looks so insanely cool, he threatens to steal the entire film had it not been for Chow (The Raid’s Gareth Edwards was always fond of his love for John Woo movies).

Woo left Hong Kong for America shortly after this film’s lukewarm reception in Hong Kong. He and Chow would later continue the story of Inspector Tequila with the 2007 video game Stranglehold, to mixed reception. Woo followed up Hard Boiled with a string of American hits such as Hard Target, Broken Arrow, Face/Off and Mission: Impossible II, most of which were financial successes, but none of which ever attained the high cultural impact of his Hong Kong heydays. Will next year’s Manhunt be a return to hard-boiled (pun intended) territory for Woo? Who knows…? To this day Hard Boiled frequently gets mentioned on lists proclaiming the Best-Ever Action films, and gets discussed and studied in contemporary cinema (check out this cool video dissecting just what it is that makes Woo’s action so good in the film).

So gents, here’s to Hard Boiled, which turned 25 a couple of weeks ago. They really, really don’t make ‘em like this anymore. Buy it, watch it, keep it, in any form… this masterpiece deserves a permanent place in your video library. In fact, I feel like watching it again. It’s like lightning in a bottle. This sort of film will never come around again.