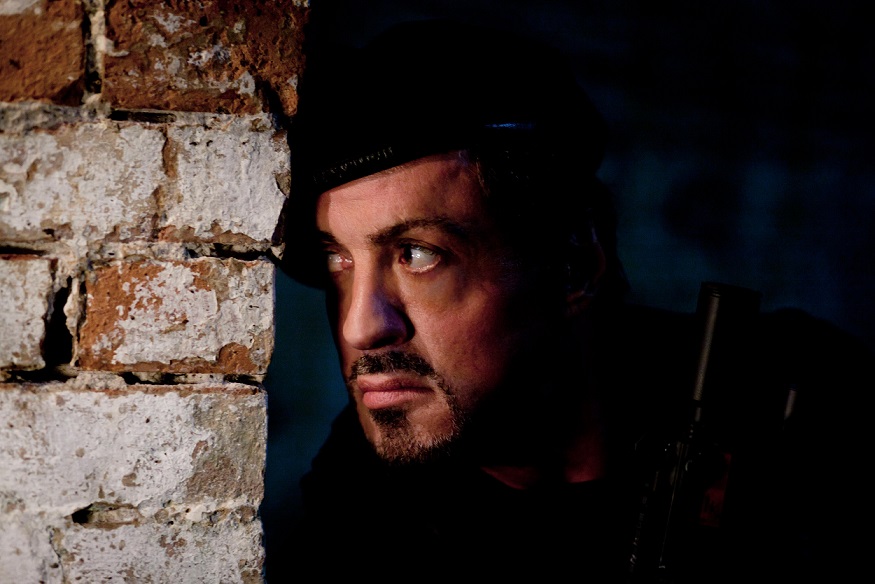 I remember that phase Sylvester Stallone went through about ten years ago.  For so long he’d been maligned by the hip mainstream and threw away his inhibitions and said; ‘Fuck it, I’m going to do my own thing and have fun with my old style stuff’, starting with the ultra violent Rambo, but then really kicking off a party by announcing himself and Jason Statham in a new movie.  That sounded great, then he announced Lundgren, then Willis, then Li… then Arnold.  The Expendables was great, I loved it… but it’s been a while since I’ve personally looked at it, now watching it on 4K UHD Blu-Ray, it’s almost like ‘finding it again’.

The first movie in this series is probably the best because, you know, bread is usually best when it’s first removed from the oven — it’s cool seeing big reunions in the sequel but this was the first time people like us who were starved of the old school stuff really got to feast after so long.  I know that when Willis and Stallone first appeared on screen together, my cinema was enthralled, but when that door opened and Schwarzenegger appeared, there was a collective gasp.  I don’t think we’ll see this ever again.  This was the class of 1990, with people who kept the torch lit beyond it (Jet Li, Jason Statham) invited to stab and maim people too, instead of boring us to fucking death with a leotard origins story.

I prefer the darker tone to this movie too, compared to the other two (and especially the third), it isn’t looking at the Fast & Furious series or the Mission: Impossible series and trying to ape them.  It’s purposely and deliberately targeting an older audience, a male audience, with men discussing what to do with two-timing women in between rescuing other, damsel, women using guns and high kicks.  I love Eric Roberts’ slimy yet classy villain and the fact that he has a henchman, aptly played by Steve Austin.  I love dialogue (I shoulda broke that bastard’s jaw) and the cagey relationship between Dolph (who in many ways steals the show) and Sly.  And why am I enjoying it now more than ever?

Sylvester Stallone is a great director and even though the movie shows its budgetary constraints now and again, the obvious labour of love overpowers it.

4K hasn’t quite (yet) taken off like 1080p Blu-Ray.  There are a lot of releases that have emerged that are underwhelming, whether it’s because they haven’t been able to get anything impressive out of old negatives, or because more recent movies have a digital 2K ‘ceiling’.  I was worried about The Expendables, because while it was filmed in 35mm, it was ‘finished’ and upscaled through 2K digital intermediate.

Well, I’m glad to report that this movie is stunning.  From the get-go, it’s clear than it is not high definition, that it’s ‘next gen’ and a reminder that we really have entered a new era.  The Expendables has depth, detail and colour on 4K UHD Blu-Ray that the old format simply wasn’t capable of presenting.  The HDR on display here gives the movie a new life, more vigour.  And this isn’t just a case of ‘popping’ here or there, like a lot of movies on this format — instead it’s consistent, jump forward to any random scene and you’ll find the same thing.  The new detail also shines in this movie because it’s particularly dark in many scenes, so now you can see more without losing the mood.  South America also looks as good as it does in Narcos, to my eyes, and that’s saying something considering how strong that series looks.

As far as extras go, Sylvester Stallone is on commentary (from the older release) and his actual interest and eager oversight gives you yet more ‘replay’ value.  On the second disc we also a marketing archive, deleted material, the brilliant 2010 Comic-Con panel (remember that?) and the fantastic making-of, Inferno.  Inferno is something else, a lengthy, in-depth documentary that is worth the price of this release alone.  It’s great seeing Eric Roberts and Sylvester Stallone joke back and forth behind the scenes, these are two cool and intelligent cats.  And while none of the supplements are in 4K, at least everything else is in HD.  (One note of error though.  On the back of the case, Inferno is listed as being in 4K and on disc one.  Not so, it’s regular HD and on the second disc).

So the bottom line, in the current hit and miss schedule of 4K releases, this one is a keeper.  I just wish they’d up their game with regards to PC playback, because otherwise it’s extremely expensive to screen capture scenes from these movies at the moment.