It is hard to believe that 20 years have passed since the films “Con Air” and “Face/Off” premiered in June of 1997 in U.S. cinemas. Needless to say this sure makes me feel fucking old. I don’t know about you guys but the last 20 years seem to have gone by in a flash for me. I’m not there yet but one of the tragic things about us men getting older is that after a certain age, we men have to go to doctors that put on rubber gloves and touch us in places no other men should touch other men. I mean fuck, this is why I avoided prison my entire life!

A lot has changed in the past 20 years. 20 years ago a lot of us still left the house without a fuckin phone and could not be reached until we got home. We got our messages in our answering machines or on a notepad next to the main phone of the house or sometimes we even did not get our messages because one of our assholes siblings forgot to give us the message. Big screen televisions were the exact same weight of a fucking car, VHS was King cause video stores were everywhere. We had to rewind our tapes before returning them and we paid late fees. MTV still played music at certain times of the day and it was still a somewhat relevant and cool channel. We still had to go to the library to get information we needed for school, we had a Clinton in the White House as opposed to one now crying every fucking day that she’s not in the fucking White House. Hanson was number one in the Billboard Charts with their one hit wonder “MMMbop” & young men masturbating to Playboy & Penthouse Magazines was still a Rite of Passage.

In the summer of 1997 a few “Summer Event” films were slated to be the biggest hits of the summer. During the month of May we already got in the United States “The Fifth Element” starring the great Gary Oldman and Bruce Willis (who at the time still gave a fuck about his career) and towards the end of May we got “The Lost World: Jurassic Park 2” directed by Steven Spielberg.

In the month of june the big romantic comedy hit was going to be the Julia Roberts vehicle “My Best Friend’s Wedding”, cause at the time star vehicles were still a thing in Hollywood. The big action pictures in the month of June were going to be “Speed 2” and “Batman & Robin”. The Julia Roberts vehicle did indeed become a hit (and not a completely terrible movie as far as chick flicks go)  but the action pictures that were supposed to become the big action movies disappointed and two films starring Nicolas Cage took their place instead. Those films are now classics in my manly book & whoever disagrees with me I say: “Fuck You!” Those two movies are “Con Air” and “Face/Off” 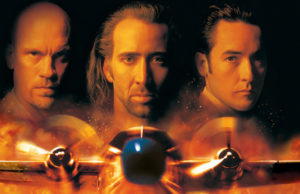 “Con Air” originally was supposed to be released during the spring of that year, however due to positive feedback from test audiences, the studio decided to push the film back to summer cause they felt the reaction was strong enough that the film might do well during that very highly competitive movie season. It also had a kick-ass teaser trailer that was generating excitement among moviegoers. Yours truly liked recording trailers on VHS tapes and I still remember recording this one.

“Con Air” was written by Scott Rosenberg, directed by Simon West and produced by Jerry Bruckheimer. The movie has an all star cast of actors who troll brilliantly in their respective individual roles. You have John Malkovich gloriously detached from Humanity as “Cyrus the virus”, you have Steve Buscemi playing a Hannibal Lecter like serial killer that sings old children songs, Ving Rhames acting like a member of the black militia, John Cusack wearing sandals with his suit and tie and Nicolas Cage speaking with a thick southern accent and a sporting a mullet hairdo. This thing could have gone really fucking bad, however Jerry Bruckheimer knows how to make these type of movies and Simon West is a very competent director. The movie is high octane, high testosterone, unapologetic manly kick-ass movie. From the pacing, to the acting, to the fuckin score, “Con Air” is fucking great. 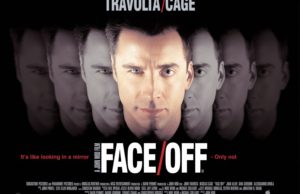 This movie spent several years in development. It went through various directors and various rewrites. Earlier in the decade it was viewed as a Sylvester Stallone/ Arnold Schwarzenegger vehicle ( I can sit for hours imagining the possibilities and performances by the actors ) but when legendady director John Woo came on board, things started to take shape. He contemplated casting Jean Claude Van Damme who brought him to America to the direct his first feature, the 1993 manly classic “Hard Target” to also casting Michael Douglas as Archer. When this did not pan out Douglas took an executive producing role in the project. Once the script by Mike Werb and Michael Colleary was to everyone’s liking, John Woo cast Nicolas Cage and John Travolta. Travolta had just worked with John Woo in “Broken Arrow” and in that film John Travolta turned in what I believe is one of the very best bad guy performances in an 90s action movie.

Because of this movie’s plot, if the film was not handled correctly, this film could’ve easily gone to shit very fast. By now we all know the legend John Woo is and some argue that this was his best Hollywood movie.  Nicolas Cage and John Travolta both came across as having a lot of fun making this movie. Both actors had a very difficult task because they had to deliver the right amount of troll and cheesiness in their respective performances without taking away the intensity of the film’s most dramatic moments.

The movie features great action and shootouts plus John Woo’s trademark slow motion shots, which at times can be very effective and other times unfortunately show the stunt doubles who look nothing at times like the actors they are doubling for in the action sequences. Seriously after so many years, somebody close to him must point this shit out to him.

The movie “Face/Off” was released in U.S. cinemas on June 27th 1997 & it debuted at number one at the box office with just over 23 million dollars and it went on to gross over 245 million dollars worldwide.

They say that music is the soundtrack of our lives & I also believe this to be the case for movies and TV shows. When we have memorable experiences as fans, we remember where we were and who we were with. I saw both these movies more than once in the theater and as a matter of fact on a Saturday afternoon I went with my friends and saw these two kick-ass movies back-to-back.

There’s a plethora of reasons why action movies or all movies for that matter are not as great as they once were in the 70s, 80s and 90s. There’s still some good movies out there but back in those days we were really spoiled.

June of 97 was supposed to be ruled by the likes of George Clooney as Batman but instead it was Castor Troy who kicked ass.