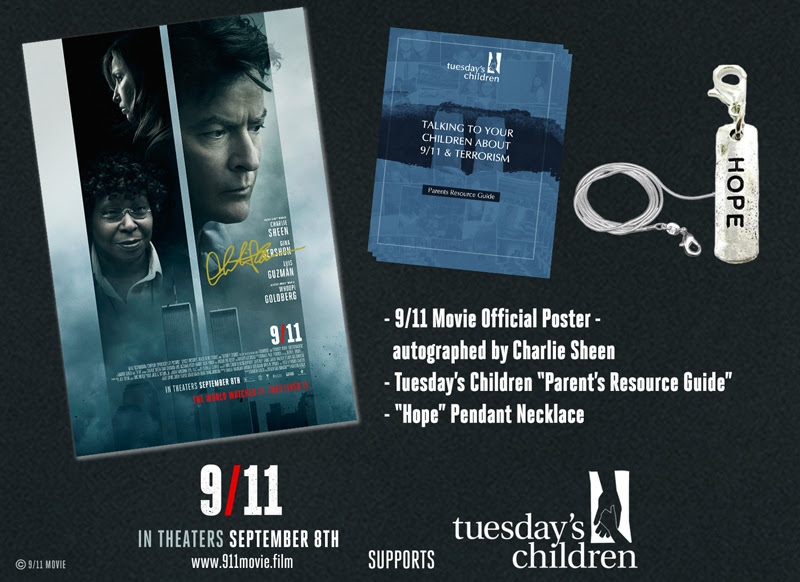 It is about that time again where we roll up to another anniversary of 9/11.  This year the movie “9/11” will mark the sixteenth anniversary of that day.  It will star Charlie Sheen and Whoopi Goldberg.  To mark it we have a give away for one reader.

I can tell you that 9/11 put an end to my blissful ideas growing up about a straightforward civilization, I will never forget our teacher positioning the television so that everyone could see what was unfolding.

To enter this competition you must email the site owner (jordan@manlymovie.net) with your name and postal address, so long as you live in the United States (where the offer is based) and are not requesting it be sent to a P.O. box.

Here is a synopsis for the movie, and then a graphic provided by Tuesday’s Children.

About 9/11
9/11 opens in theaters on September 8 and features an all star cast including Luis Guzman (The Taking of Pelham 1,2,3), Gina Gershon (Showgirls), Wood Harris (Justified), Jacqueline Bisset (Dancing on the Edge (BBC), Welcome to New York), Olga Fonda (The Vampire Diaries) and Bruce Davison (X-Men).

In the World Trade Center, a billionaire sits in his attorney’s office awaiting a divorce hearing against his wife. In a west side apartment, a bike messenger kisses his 5-year old daughter and sings her “Happy Birthday” before leaving for work. A maintenance man gets dispatched to help a tenant with his lock. In an upper east side apartment, a young model musters the courage to break up with her sugar daddy. As random as random can be, these individuals step into a crowded World Trade Center elevator.

Wrapped up in their own world, they all ride silently hearing only the sound of the elevator giving notice of each floor. When the elevator stops on the 34th floor, it empties leaving only these five behind. Moments later … their world changes as the collision of a jet into the North Tower incapacitates the elevator.

With no understanding of what has happened and is happening around them, these fives are forced to band together and fight against all odds to escape from the impending horrific collapse. During these critical minutes, a story of courage, faith, and the will to live unfolds.