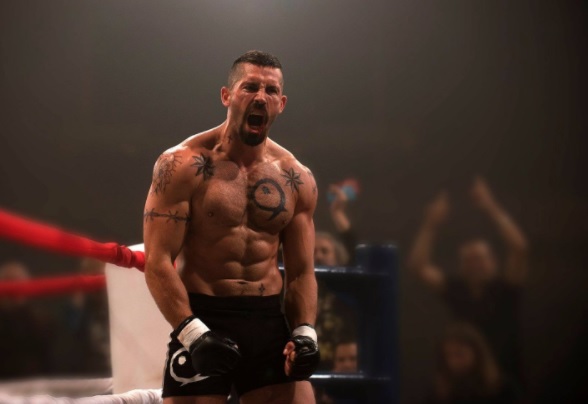 It seems like this film has been discussed for years and come to think of it, it has been.  It’s been seven years since the third movie debuted at ActionFest and it might have looked like Boyka’s travels (it’s now firmly a Boyka/Scott Adkins series) were over, but the fourth movie is released this week.  It’s not a classic and probably not even the best in the series, although it is redeemed with good fight scenes.

This one sees Yuri Boyka going through some changes; growing closer to God and developing a conscience.  After accidentally killing a man in a fight who would not stay down, the fugitive Boyka shuns fighting and travels to Russia to repent to the man’s widow.  While she is having none of this, Boyka finds the woman is indebted to local gangsters running brutal fights.  Mob boss Zourab (Alon Aboutboul, alumni from projects from Rambo III to London Has Fallen) takes note of Boyka’s turmoil and offers to wipe the woman’s debt, if the former will fight for him.  And like Scott Adkins’ other movie released this week about a reluctant fugitive fighter being put to work against his will, Boyka turns his true violent disposition ultimately against his new handlers.

I think that this film is kind of a mixed bag.  The downside is that it’s another Nu Image project that was filmed in Bulgaria and once again, they seem to want to pick some of the most downtrodden places in that country from which to film in, which is partially because of the script — e.g. did Teodora Duhovnikova’s (the female interest, Alma) area of work really have to be written as a beaten up community centre?  Bulgaria has some nice beauty spots, why not use those?  Really, Nu Image does the Bulgarian tourism industry no favours. Match this with Todor Chapkanov’s mediocre directing and weak villains (the monster boss was interesting, but barely used) and a little faith is needed to stay with the movie.

Of course, the payoff not only comes with Scott Adkins’ screen presence and performance, but with the Tim Man-choreographed fight scenes.  Those are the real selling points of this one, they are entertaining breaks from the decidedly weak thriller bullshit throughout the movie.  Each fight scene is well lit and presented in a lucid manner, so that everything can be easily seen.  And also, perhaps worse than shaking cameras in other movies is poor editing — not found here.  Consider that each fight in this movie has by my estimation probably around four cuts.  That’s all!  When you think about it, for a fast paced brutal fight scene, that is in practical terms a single take.  So it means that there is no cheating possible, you can only film quality stuff or you’ll be exposed.  And that’s what you get – very good fight scenes.

I’m going to give this one a seven.  For long stretches (of its 85 minutes or so) it lacks energy, with weak villains and a drab appearance.  But it has fight scenes that fans will really enjoy, it’s clear that the film changes hands when those scenes begin and end.