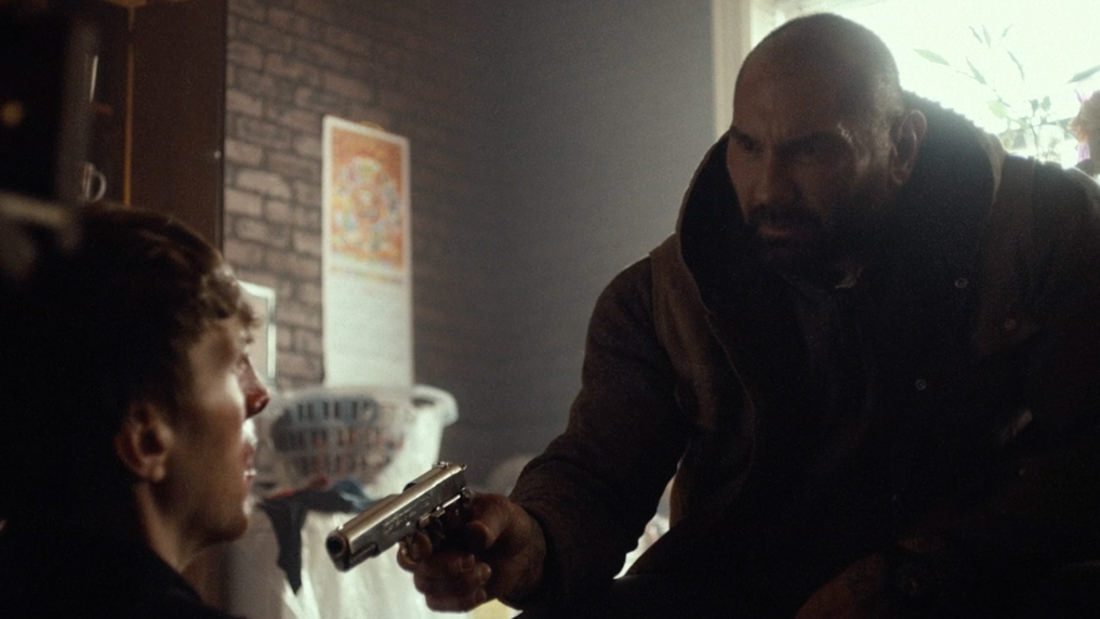 Normally these days I look forward to films with Dave Bautista in them.  Good actor, great actor even. But even better, he seems to pick a good script to go with his strong performances.  Bushwick is an intriguing premise.

The film hits the ground rolling, when a horde of racist Alex Jones listeners (a mixture of SWAT-dressed mercenaries and military), launch a surprise attack and start blasting the fuck out of New York.  “Is this 9/11 again?”, asks Britney Snow.  “No,” responds Dave Bautista, “this is something else“.  It’s the second American Civil War, and the South wants to get medieval.  Through sporadic gun battles on the streets, Bautista and Snow attempt to work their way to a safe zone, where the Yankee army is rumored to be evacuating civilians.

You might as well call this ‘Alt Right vs. AntiFa: The Movie’, with Bautista hobbling through the middle with a sore leg.  Of course, the term Alt Right is not mentioned, nor is the name Alex Jones nor AntiFa, but the message is clear with passing phrases preferred by each showing up, with the former of course being the big nasty.  Bautista this week acknowledged that the movie’s release is remarkably timely given current cultural strife in America, but it’s almost too prescient for me, I don’t know if I believe in coincidences.  It’s clearly propaganda.

Anyway, if you’ve ever seen Children of Men, which is a great film, you can expect a riff of that here.  A collapsing civilization, with the military running rampant and a lot of single takes.  It’s actually mostly decent for a movie with a tap-drip narrative, poor acting from Snow and suspect special effects (read: bush-league CGI post-production).  The movie does relay tension quite a bit now and again, with Bautista once again putting in some solid work.

This movie is good for one watch, at least in the current climate.  But don’t expect much, John Carpenter would’ve made a classic out of this.