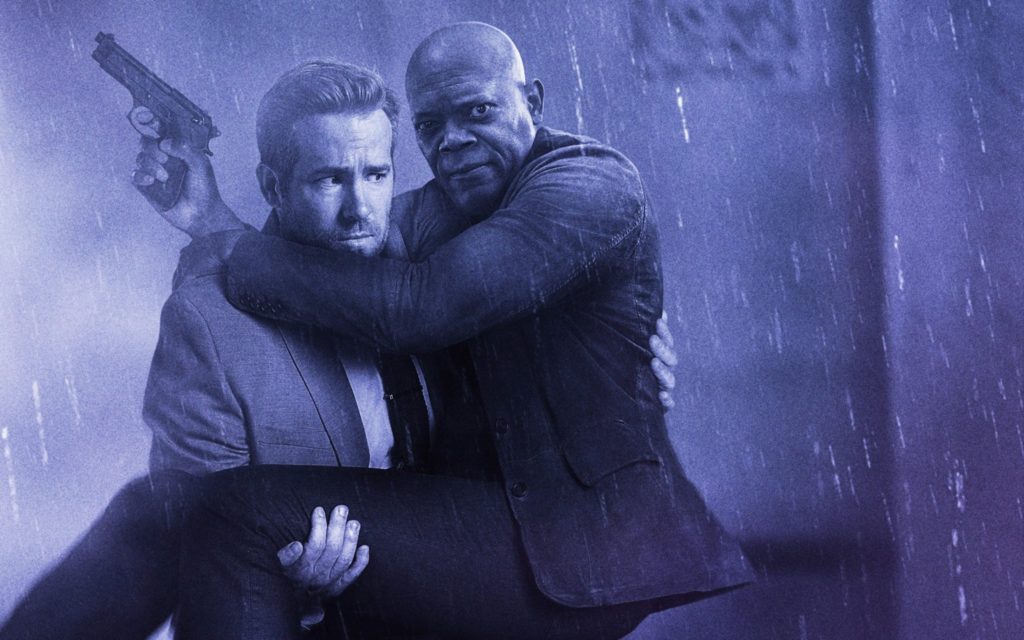 I think everyone here can agree that 2014’s The Expendables 3 was a bust, considering it was highly anticipated by fans of the old 80’s – 90’s action guard… only to be let down by a two-hit KO by its weak “young blood” cast, and then further by its PG-13 rating which only hampered down the action sequences. We expected great things from the film, considering that a lot of the actors in there weren’t getting any younger, and their careers needed some much revitalizing. One key player who managed to walk away unscathed was director Patrick Hughes, whom I came to realize – after watching this new film – that, like the cast, he was also given a raw deal by Avi Lerner and Sylvester Stallone.

The Hitman’s Bodyguard revolves around Michael Bryce (Ryan Reynolds, enjoying a career high following last year’s smash hit Deadpool) – self-proclaimed as the world’s top protection bodyguard, who is called upon to guard the life of notorious assassin Darius Kincaid (Samuel L. Jackson). As the duo criss-cross from England to Amsterdam in order for Kincaid to make it to The Hague on time to testify against a ruthless Belarusian dictator (Gary Oldman, phoning it in here), they have to survive rounds of opposing bullets from the villain’s henchmen… if they don’t kill each other first, that is.

Right from the start, you know the screenplay isn’t going to win some originality award, as it borrows bits and pieces from other superior buddy action comedies such as the great 48 Hrs., Midnight Run, and even Rush Hour of all films. The background score as well seems to be too desperate in elbowing you into thinking “this is a buddy movie, did you catch the joke?” with its annoying harmonica riff, a cliche of the comedy film genre. Add to the fact that Reynolds’ brand of sardonic comedy may not work on all viewers, and even much so Jackson’s usual mugging for the camera will most definitely have worn a lot of viewers out ever since his knack for using the word ‘motherfucker’ has only been brought to the mainstream following 2006’s Snakes on a Plane. But the first red-band trailer hit the web, and I was sold. Any movie that straight up acknowledges it was going to be riduculous AND be R-rated at the same time is at least worth a look.

Despite all of the above mentioned, I actually enjoyed this film quite a lot. The jokes are hit and miss, but this time they mostly hit, hard. Reynolds, for the most part, is the straight-man in this “odd-couple” pairing and comes up with a number of good dry quips, whereas Jackson relishes with glee in accentuating every syllable of the golden mf word, this time with effort to entertain as it felt more of a deliberate self-parody more than anything. Their chemistry and comic timing made the entire film, and it is made more apparent when scenes not featuring them lack the same spark, specifically involving Bryce’s agent ex-girlfriend (Élodie Yung from Gods of Egypt). Oldman, again, feels like he’s being the typical Eastern European villain, like a direct sibling of his character from 1997’s Air Force One, and I’m still debating on whether that is a good or okay thing. However – a surprise came in the form of Salma Hayek – still beautiful as ever – as Kincaid’s incarcerated and hot-headed wife; she steals all scenes she’s in with great comic timing, even in flashbacks that make humourous use of Lionel Richie’s hit song Hello.

What surprised me was the way Hughes handled the action sequences in this one, positively. Usually, in modern-day action comedies, the action is stilted to make way for awkward humor, in a bid to make them more appealing for modern-day audiences, you see (Paul Feig’s Spy, for example). Not here. Between the comic banter and f bombs dropping like flies, and despite (very few) CGI backgrounds (a rarity in Millennium Films’ oeuvre), Hughes floors it in the action sequences, which makes The Expendables 3 look worse now. Bullets hit flesh, blood pours or sprays out. Bones are broken. Bodies are flung in the air when an explosion or collision happens. Now that Hughes has his way with an R-rating, it’s quite a surprise to see that the man is very adept at handling action. A spectacular action set piece stands out – set in the streets and canals of Amsterdam where a prolonged shootout leads to a chase that involves cars, a bike, and a boat. It was a relief to see that they were genuine, unfaked stunts.

Already this has gotten some flak from critics, for its un-PC handling of meaningless violent action sequences (due to recent incidents) balanced out with screwball comedy banter between Reynolds and Jackson, against an unoriginal plot. To which I say… does it matter? Sometimes all you need is a good time at the theater, be it a solid actioner with stunts or a hearty laugh with some guys and gals. It’s no classic, but it’s good to see that Hughes, Reynolds, and Jackson delivering something that includes a little for everyone.