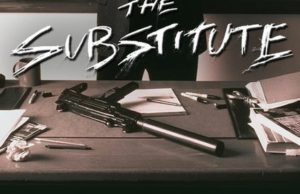 The end of summer means the start of a new school year for the kids in America. These kids will march into those academic institutions and learn that every individual historical figure that was instrumental in the shaping of the nation was a piece of shit who don’t deserve to be mentioned, capitalism is evil & that the only opinion that they should ever have is the one that their big government overlords tell them they’re allowed to have. They will write these lessons down on their iPad, iPhone, tablet, laptop, computer or whatever digital gadget was bought for them by their parents on Walmart, Best Buy or Amazon depending on where they got the best offer. After school these kids will get together on Starbucks, drink overpriced coffee, get free WiFi, rage about “white privilege” & bitch about Corporate America.

Over the years there have been many, many movies that take place on a school located in a not so good part of town, that lacks funding, where students have been screwed by the system until one day somebody walks in there and finally gives a fuck about them and the students moved by such gesture, stop doing drugs and learn how to fucking read. During the 80s & 90s we got our fair share of these type of films. Some of these movies were good, others not so much.

In 1996 we got a movie about a substitute teacher that wasn’t your typical preachy-gay ass- PG-after school special. The movie was “The Substitute”.

The movie stars the unfortunately very underrated manly man Tom Berenger. Berenger stars as Jonathan Shale, a combat specialist mercenary who after a botched mission in Cuba returns home to Miami, Florida along with his crew. There Shale is reunited with his girlfriend, who is a history teacher at Columbus High School in Inner-city Miami. His girlfriend’s name is Jane Hetzko & is played by Diane Venora. Jane gets her knee broken when she stands up to the school’s gang leader, Juan Lacas played by Latin music star Marc Anthony.  After Jane got attacked, Jonathan Shale decides to go undercover as a substitute teacher named James Smith & go after Lacas himself but soon discovers that Lacas is just an employee for a far greater criminal. Shale calls upon his reluctant team to go to war & help him bring down a big drug operation.

When I was a kid adults were still allowed to beat our asses. My parents kicked my ass, my grandparents kicked my ass, even teachers were still allowed to kick our asses. There was no such thing as abuse or “Time Out”. The only time my father ever called a “Time Out” was when he got tired of kicking my ass. Kids today are out of control because nobody can tell them shit. They’re overly sensitive and spoiled as fuck. Now more than ever America needs teachers like this

Berenger is in full Action Alpha Male Mode here & he kicks ass. He really is a good actor that deserves more praise and credit. But he is not the only good actor in this film however. His team of mercs include Luis Guzman, Raymond Cruz and William Forsythe. Although I do wish they would have spend more time with these characters which the film does not due to time restrains. The school principal is played by one of the only real Ghostbusters, Ernie Hudson. Hudson here does something different from his usual nice guy roles. There’s a really good scene between Hudson and Berenger that takes place in the principal’s office in which they’re both trying to get a sense of what the other is all about. Little scenes like that is what helps this movie stand out in the genre it belongs to.

The movie has no shaky-cam, no CGI, practical effects, real blood squibs and old-school shootouts. Movies like this just don’t get released in theaters anymore for the most part. “The Substitute” was released in North American theaters on April 19th 1996 and I remember watching it on opening weekend. It debuted and the number 2 spot behind Richard Gere’s “Primal Fear” (another good movie by the way)  with a little over 6 million dollars and it went on to gross nearly 15 million dollars in total.

It should be noted that they made 3 straight to video sequels starring Treat Williams. In an interview Tom Berenger stated that the reason why he returned to the “Sniper” franchise was because they paid him while the producers of “The Substitute” made money but refused to pay him accordingly and he referred to them as cheap bastards. In my opinion, they should have paid the man. Berenger is one of those actors that automatically elevates the material with his manly presence.

The sequels however are still watchable B action movie DTVs.

“The Substitute” is a manly movie. So if you’ve never seen it or haven’t seen it in a long time, it’s worth a watch. Berenger kicked ass.