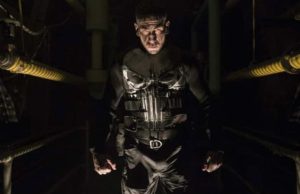 I can honestly say I have enjoyed all three Punisher films. The films have been shit on a lot by not only critics but by fans (or so they claim) of the comic books.  I think all three actors brought something different to the role of Frank Castle in the movies and their performances worked well within the context in which the story was told.

There was “The Punisher” the Drago version in 1989

Then there was the Thomas Jane/ Travolta version in 2004

Jane returned to play the role in a short movie titled “Dirty Laundry”  in 2012.

The subject of comic book movies is a very polarizing one around here. However I think we can agree Frank Castle is not some tulip beta pussy boy character and IMO, the Punisher films have kicked ass. All three movies have been different and had their own identity & I liked all three interpretations of the character in the films.

However when it comes to Jon Bernthal I don’t have a formulated opinion because I haven’t seen the Daredevil Netflix show. There are a bunch of shows I need to catch up on and that is one of the shows that’s on my “Need to watch ” list. Hopefully I’ll get to it soon. Not every Marvel Show interest me but this is one of them.

So far I have to say that for the most part I’ve heard and read nothing but good things about Bernthal in the role. The Punisher is getting its own Netflix show and it’s being reported it will begin streaming in November on Netflix.

These are the reported titles of the episodes of the upcoming series:

Ep.10- Virtue of the Vicious

Here’s a trailer for the upcoming series:

So what you guys think of the movies?

& for those that have seen the Bernthal as the Punisher, how is he? You looking foward to this show?

I am… but Goddamn I need to catch up!