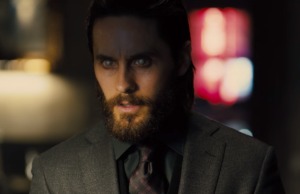 One movie I’m really looking foward to is the sequel to Ridley Scott’s sci-fi classic “Blade Runner”.  The sequel “Blade Runner 2049” is directed Denis Villeneuve who directed the very manly movie “Sicario” , “Prisoners” and “Arrival”. The sequel will be released in early October, however we’re going to get three short movies before the film’s release that tie the events of the original film to the sequel.

The first short film is “2036: Nexus Dawn,” which is directed by Scott’s son, Luke Scott. It features Niander Wallace played by Pimp Joker Jared Leto who has created a new line of Replicants called Nexus 9, which he claims are an improvement on the Replicants from 2019