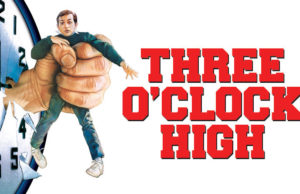 This week I’m reviewing some good manly high school movies. So I would like to bring attention to one that is one of the best high school films of the 80s IMO and yet sadly one that is often overlooked, the movie is “Three 0′ Clock High”.

A few months ago I was at the movie theater with some friends and the trailer for the movie “Fist Fight” was shown and I pointed out that it looked like a movie that was ripping off “Three O’ Clock High” and my friends looked at me like they did not know what I was talking about which is okay cause this happens to me a lot.. Hard to believe, right? (No comments please😠)

I eventually ended up watching the movie “Fist Fight” and it’s not a terrible movie, it’s okay. I appreciated the adult approach when it came to language and certain jokes and the fight was okay but the movie is still a rip-off and it cannot compare to the brilliance of the 80s classic that clearly inspired it, even though the director, the producers nor the cast gave the film that clearly inspire it any credit.

The movie is about a nerdy high school student/reporter named Jerry Mitchell played very well by Casey Siemaszko who is asked to write a story for the school’s news paper about a new student named Buddy Revell played by manly man Richard Tyson, a student who is rumored to have a violent past & who’s stories of violent acts have become legendary.

It is said that Buddy Revell does not like to be touched & Jerry nervous as a motherfucker, does so trying to be friendly & this infuriates Buddy who challenges him to a parking lot fight immediately after the end of the school day at 3 0’clock.

I’m always pointing out the importance of the villains in these movies cause if the villain don’t work, the movie does not work or the movie is not as effective. Here Buddy Revell is brought to life by Richard Tyson in a very effective manner in his first movie role. Most fans will recognize Tyson as the bad guy from Arnold Schwarzenegger’s classic ( it is a classic to me damn it! ) “Kindergarten Cop”

Richard Tyson has done well for himself, I mean he has over a hundred credits listed on IMDB & is still working a lot to this day, however I always felt he should’ve become a bigger star in Hollywood because in my opinion, he had enough talent and charisma to do so. Maybe his agents suck or he did not know the right people but he should have been a bigger star in my book.

Richard Tyson did a movie with 80s uber babe Sherilyn Fenn & in this movie she got very naked. I must admit I almost broke my wrist a few times during my youth to this movie cause watching Mega Babe Sherilyn Fenn naked on my TV was too much for my hormones to take. The movie was the skin-classic “Two Moon Junction” from 1988

“Three 0’Clock” is a well made 80s movie. Casey Siemaszko was the anchor of this movie and he did a great job as the lead character Jerry. A lot of fight movies take place during a time period that allows the protagonist to grow and train so that he could eventually face his adversary. In this movie the protagonist just has a few hours to go from beta male to Alpha Dog and Siemaszko does a good job in bringing this transition to the screen and making it believable.

Unfortunately this movie did not find the audience it deserved when it was first released. “Three 0’Clock High” was not a box office success. It opened in 849 theaters nationwide on October 9th 1987 & earned $1,506,975 on its opening weekend. The total Box Office gross of the movie was over $3 million dollars. It made most of it’s money on opening weekend.

But over the years it developed a cult following and you can count me as one of it’s members. While a generation of moviegoers will probably think “Ice Cube was da bomb in Fist Fight!” I’ll take the movie that features the bad guy from “Kindergarten Cop” beating the shit out of everyone in high school.