We have an early Christmas present for three readers of ManlyMovie; 3x copies of 2017’s best WW2 movie, Dunkirk, on 4K UHD Blu-Ray, courtesy of Warner Bros.  I and plenty of other AV-Philes have been eagerly awaiting this one, since it is a ‘true’  4K release for UHD as it’s new and was shot in 70mm. 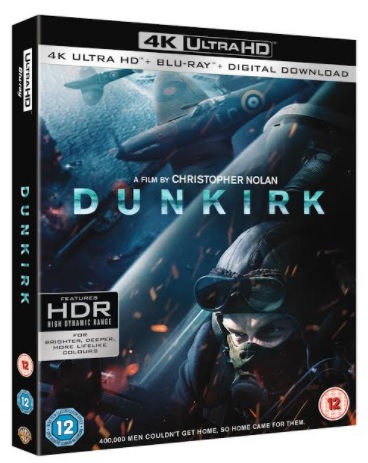 When 400,000 men couldn’t get home… Home came for them. Experience Christopher Nolan’s Dunkirk on Digital Download now and on 4K Ultra HD™, Blu-ray™, Blu-ray™ Limited Edition Filmbook and DVD December 18. To celebrate the release we are giving you the chance to win a copy of the action on 4K Ultra HD™!

“Dunkirk” opens as hundreds of thousands of British and Allied troops are surrounded by enemy forces. Trapped on the beach with their backs to the sea they face an impossible situation as the enemy closes in. The story unfolds on land, sea and air. RAF Spitfires engage the enemy in the skies above the Channel, trying to protect the defenceless men below. Meanwhile, hundreds of small boats manned by both military and civilians are mounting a desperate rescue effort, risking their lives in a race against time to save even a fraction of their army.

Watch the incredible trailer below.

To be in with a chance of winning a copy of Dunkirk on 4k Ultra HD™ simply submit your answer to the question below:

After winning an Oscar for his work in Steven Spielberg’s Bridge of Spies, this actor, who portrays Mr. Dawson in Dunkirk, starred in Spielberg’s The BFG and upcoming Ready Player One. Name this actor.

Related ItemsAll
← Previous Story TMoney: If They Kill Me, You Know Where To Look
Next Story → New Kickboxer: Retaliation Artwork And Images