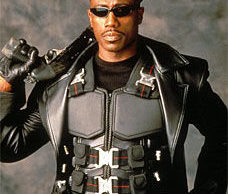 Couple of days ago I went to see Marvel’s latest release “Black Panther” with a few friends cause everybody wanted to see it cause the fucking thing has been hyped like “Jesus 2.0”. After viewing it I thought about maybe writing a review for it on this site for those that might be interested cause the film is not as kid-friendly as other recent Marvel films like for example the last Thor movie “Thor: Bang-A-Cock” or whatever it was called cause that franchise is now geared towards 5 year olds & by the way this is coming from someone that actually liked the first two “Thor” movies.

Like I wrote the film has been getting a lot of praise from audiences, nerds, critics, celebrities, former first ladies, at this point people are coming back from the dead and praising this fucking movie and touting it as “The first this” and “the first that” and while all this was going on I started to ask myself “Wait a minute, what the fuck happened to “Blade”?!” and “How come Wesley Snipes is not getting his proper due motherfuckers?!”

It is very sad that people are not giving the movie “Blade” the merit it deserves because it doesn’t fit with the narrative they wish to put out there and then they can’t pat themselves on the back as much if they do mention that a black actor already played a title role in a much much better comic book/ superhero Marvel film not in the year 2018 but 20 years ago in 1998.

I recently was having this discussion with somebody & his argument was how “Blade” had nothing to do with the current success of Marvel, that it’s not a superhero movie, that it’s a 90s action/horror film, that it was rated R blah blah blah…. and to all of this I say:

Let’s take a trip down memory lane shall we. By the late 90s the superhero genre on the silver screen had seen diminishing results at the box office and Hollywood was losing whatever faith it had left on the genre. In 1997 ( 10 years after the last Superman movie was released) “Batman & Robin” was released & it received lousy reviews and audiences thought for the most part the movie was shit and it was not as successful as previous Batman installments. Other films in the genre did not fare as well either, Stallone did not have a lot of success with “Judge Dredd” ,”The Phantom” starring Billy Zane underperformed at the box office and then there was Shaquille O’Neal in “Steel”.

The genre was not proving popular at the box office and it is worth mentioning that none of them were Marvel properties because in those years Marvel had filed for bankruptcy and lots of their properties were in legal turmoil in court cases and some previous attempts to bring characters to life on the big screen such as Cannon’s “Spider-Man” had failed.

Now I am a fan of Dolph Lundgren’s Punisher but sadly it’s release was not handled well by it’s distributors. Still…Kick Ass movie👍

Let’s just say that Marvel was not the power house in pop culture that it is today. Chris Evans where you at?

And to most audiences Samuel L. Jackson is Nick Fury but those of us who love 80s and 90s cheesy TV well,  Sam MothaFukin’ Jackson is not the first actor to play Nick Fury, a living legend got to do it before him in his own Nick Fury movie, “The Hoffmeister” himself…David Hasselhoff.

But by the late 90s Marvel was starting to get things in order & “Blade” was the first of its properties that got a legitimate treatment, budget, release by a legitimate studio, New Line Cinema. Ironically Wesley Snipes was trying to get a Black Panther film made but he was unsuccessful in his attempts to develop that property into a movie but David S. Goyer had been hired to write a “Blade”  film for New Line Cinema and his top choice to play the title character was Wesley Snipes. This proved to be a great choice cause Snipes was tailor-made for the role.

During its pre-production stage Jet Li was offered the role of the bad guy Deacon Frost but Li opted to be the villain in “Lethal Weapon 4” instead. Bruce Payne was also considered for the role before Stephen Dorff was cast. With the cast locked in, a shooting script finished and a director Stephen Norrington hired, “Blade” went into production on February 5th 1997 with a budget of 45 million dollars.

But after principal photography wrapped the movie ran into some troubles. Test audiences did not react well to the first cut of the movie which ran about 140 minutes long and the original ending was scrapped and reshoots were ordered. In the third act of the original cut of the movie the character of Deacon Frost turns into “La Magra” which was this giant mass of blood-thing that Blade goes up against but the special effects department could not get the effects to look right and test audiences hated it and it was reshot with Deacon Frost remaining in his physical form and having a sword fight with Blade. This caused the film to be delayed for some time but the film was eventually released on August 21st 1998 in North America.

Not every critic gave this film a positive review (fucking pussies!!) but some did and the movie was well-received with audiences making it a surprise box office hit making 70 million dollars in the U.S. box-office & 131 million worldwide.

For those naysayers keep in mind the following, “Blade” was the first successful Marvel property at the box office. It was not a well-known comic book character like Spider-Man for example and the success of Blade proved that a secondary character or a not so well-known character can have its own successful franchise. Once they had this success going they were able to get other things going as well like the X-Men movie and later on Spider-Man.

If Blade is not considered a hero cause of it’s dark tone, then why Batman doesn’t get the same shit when he’s called “The Dark Knight”.

The topic of comic book movies is a divisive one among this group and that’s understandable. I mean training montages in action movies for the most part have been replaced with a scene where a guy gets bitten in the dick by an insect or falls into a pit and comes out with the ability to fly or shoot something out of his ass or whatever.

But this movie “Black Panther” is being celebrated as the first Marvel property to feature a black superhero and that is just not fucking true, “Blade” was first and it’s success was instrumental in getting other Marvel properties made. So instead of the media kissing Baby Creed’s ass, it is Wesley Snipes that should be getting fucking props cause he was kicking ass in a Marvel movie 20 fucking years ago!

By the way “Black Panther” is not a terrible movie but at this point is way overrated. It is an okay movie to me, that’s it.  It’s not even the best Africa movie… that honor still goes to “Coming to America”

So while the Politically Correct, Tax Loving,  Hillary Dick Riding Media is obsessed with praising “Black Panther” with false facts, I urge movie fans not to forget two people.. Simon Phoenix himself Wesley Snipes, the man who was kicking ass in a Marvel movie 20 years ago and Darryl Jenkins, Soul Glo Legend & Manly Man