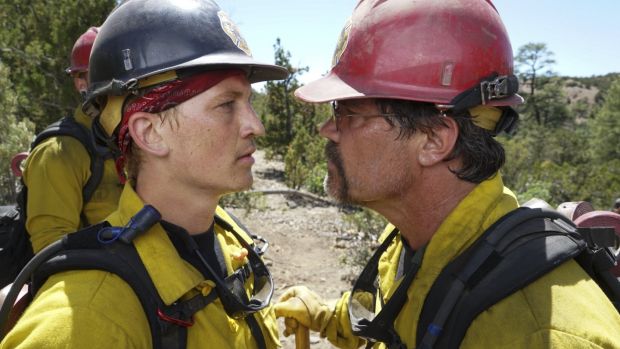 Firefighter films are a go-to manly movie niche but they don’t always work out.  For every Backdraft (1991) there is a tepid Ladder 49 (2004).  Ensemble movies don’t always work either, but Only The Brave, the ensemble firefighter movie based on the Yarnell Hill Fire, one of the deadliest in American history, is a surprisingly watchable film. Although it’s a bit clichéd, everyone shows up for work.

Josh Brolin heads the cast as Eric ‘Supe’ Marsh, leader of the Granite Mountain Hotshots, an elite group of firefighters  Also among The Granite Mountain Hotshots are Taylor Kitsch, James Badge Dale and Miles Teller. We follow the group as it grows from a fuels mitigation crew, to a handcrew (Type 2 I/A) in 2004, and ultimately to a hotshot crew — with a little help from Jeff Bridges.  If you aren’t aware of the real life events, it’s probably best to not research them or for me to mention them any further if you intend to watch this one.  It’s easily spoiled.

The film suffers major tropes, for instance Miles Teller’s junkie,  Brendan ‘Donut’ McDonough, fathers an unexpected baby and must get his shit together, so he tries to join the crew.  But Taylor Kitsch’s Chris MacKenzie rides him and tries to block his entrance, making the former prove himself.  From their first encounter, you know where it’s leading.  It’s also a soft rated movie, don’t expect anything ‘R’ here, which might disappoint some.

But some people are criticizing this movie for being too ‘macho’, I don’t know what such people were expecting from a film about hard-bitten fire fighters.  Do they expect men to go up dangerous hills and try to talk the fire down?  The film has (well acted) bravado and I would expect nothing less.  One thing that worried me too, was visual corner cutting.  These days we see too much blue screen; fake car rides, fake helicopter rides, or fake ‘on location’ set pieces.  I was pleased to see that this movie was (mostly) practical.  When the men set out on a Huey, that’s the cast right there on board.  They’re also up there on smoking hills, somewhere… with great cinematography I might add, the film looks as expensive as its cast.

The extras to consider on this DVD release:

Overall, it’s a bit long, but never becomes tedious.  The men definitely deserved a film with a good cast.  It’s worth one watch — the fact I did not Google the events beforehand hammered home a good (savior) ending.