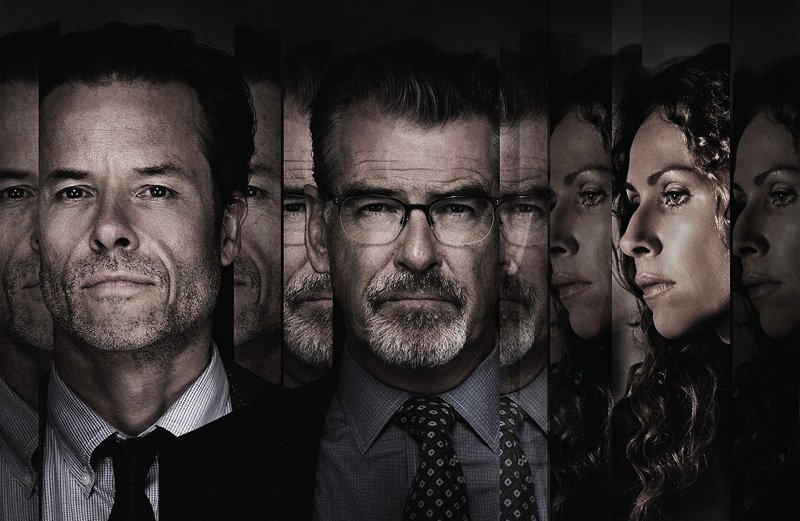 It seems that Pierce Brosnan and Guy Pearce are easier to hire for work these days.  Poor old Brosnan in particular has even been hired by the Indians for some bogus mouth wash commercials, that has left Brosnan upset.  Now they’re back on the VOD circuit for The Spinning Man, a movie labelled as a mystery thriller.  Although there isn’t much in the way of mystery going on, it could have otherwise been ‘average’ were it not for the baffling ending.

Guy Pearce plays Evan Birch, a philosophy professor with a keen eye for college girls.  He has colourful history in engaging in extracurricular activities with his students, despite being a family man, so when one of them goes missing, Birch comes under police suspicion.  This is when Det. Robert Malloy (Pierce Brosnan) shows up to hound Birch at every given turn — well, not too many turns, his screen time is sort of limited.  Sort of like Columbo, Malloy hounds Birch for 100 minutes by turning up in random places with not-so-random questions.

The theme of the movie is that Birch has a bit of the old schizophrenia and can’t remember whether he murdered the girl or not himself, after enough questions from the police (and eventually, his wife, played by Minnie Driver).  This is the ‘mystery’ element, and all you can expect from the film.  It’s rote and directionless and the only area of interest is Brosnan’s detective — the better scenes in the movie involve Brosnan taking shots at Pierce. For example his subtle but sarcastic probe, ‘what does a philosopher do, anyway?’  It’s a good question, since Birch lives in a grand house yet is teaching no-marks a bunch of guff on a low salary.

What torpedoes this film though is the ending.  With some decent cinematography and fine acting, you could almost have listed it as ‘forgettable’, until we are left short changed with the conclusion of the disappeared body.  Were I not tired of the film by it’s conclusion (it’s too long), I would have laughed at it.  I do wonder how people like Pierce and especially Brosnan (this is an Irish DreamTime movie, Brosnan’s hand is in the pot, kind of) could sign on without demanding a simple ending re-tool.

The Spinning Man is released April 6th in theaters and on demand.