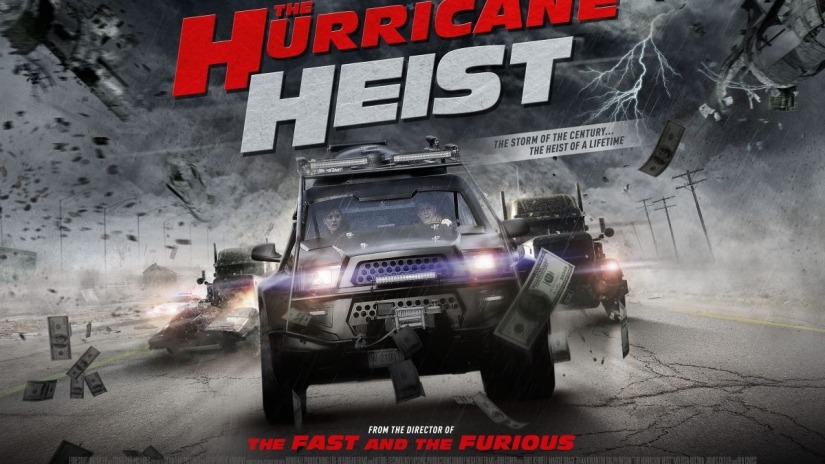 Rob Cohen can make a bad film look good, and work.  Take the first Fast & Furious film, it’s the best in that series because it’s the closest to an old 80s/90s action yarn next to its bloated computerized sequels.  This film has a good premise, a heist occurring in a small town while it’s evacuated on account of a large hurricane.  It should’ve worked, because Cohen is an underrated director, but it the family themed softness and the shark jumping end make it a waste.

The movie recruits a bunch of C-listers (are Toby Kebbell, Maggie Grace and Ryan Kwanten anything else?), as hurricane chaser, security truck driver and deadbeat mechanic respectively, to ‘do the right thing’ during the theft of hundreds of millions of dollars.  Sorry, but I have to interject here, is there such thing as ‘doing the right thing’ if you can skim a few bucks off the Fed in such a circumstance?  So I also deduct a point because the heroes don’t even consider it.  While a hurricane hits the town, they use their knowledge to pit the forces of nature against the thieves.  Y’see, that’s a creative way of not shooting them in the head and keeping the rating down.

The first half of this film looks like 100 million dollars, like something even Tom Cruise would show up in.  It looks slick, with expensive (looking) sets, and even cheap sets made to look interesting by the director.  The action sequences are also above average with long cuts and considerate camerawork.  The proposition of a heist taking place during a noisy hurricane is also exciting.

But then the problems unfold.  The villains are uninteresting, there are too many of them and they are bad actors, following a threadbare script where nothing clever happens, or barely anything at all.  Worse, the film is extremely soft — the tone is set when the thieves take out U.S. federal guards with dart guns, and although real guns show up later, it’s obvious great care is taken to neuter their presence.  While the first half of the film looks great with practical sets and so forth, the end seals the deal of ruin — my current pet hate rears its ugly head.

Green screen abuse is a problem.  It gives film makers a blank cheque, which strips them of creative enterprise and introduces the temptation to jump the shark.  The end of this film is crap, I’m sure the finale looked ‘real’ to those whose eyes glared over every frame painstakingly over many hours, but to a fresh pair of eyes, SOUND STAGE is the only thing that screams at us.  No good, I hate that shit.

To summarize, go back and watch Hard Rain (1998) instead… far better.  P.S. we couldn’t have a big storm movie without the obligatory global warming monologue.  They still haven’t gotten around to discussing just how much more tax money they want to wring out of us though, in these movies… odd.