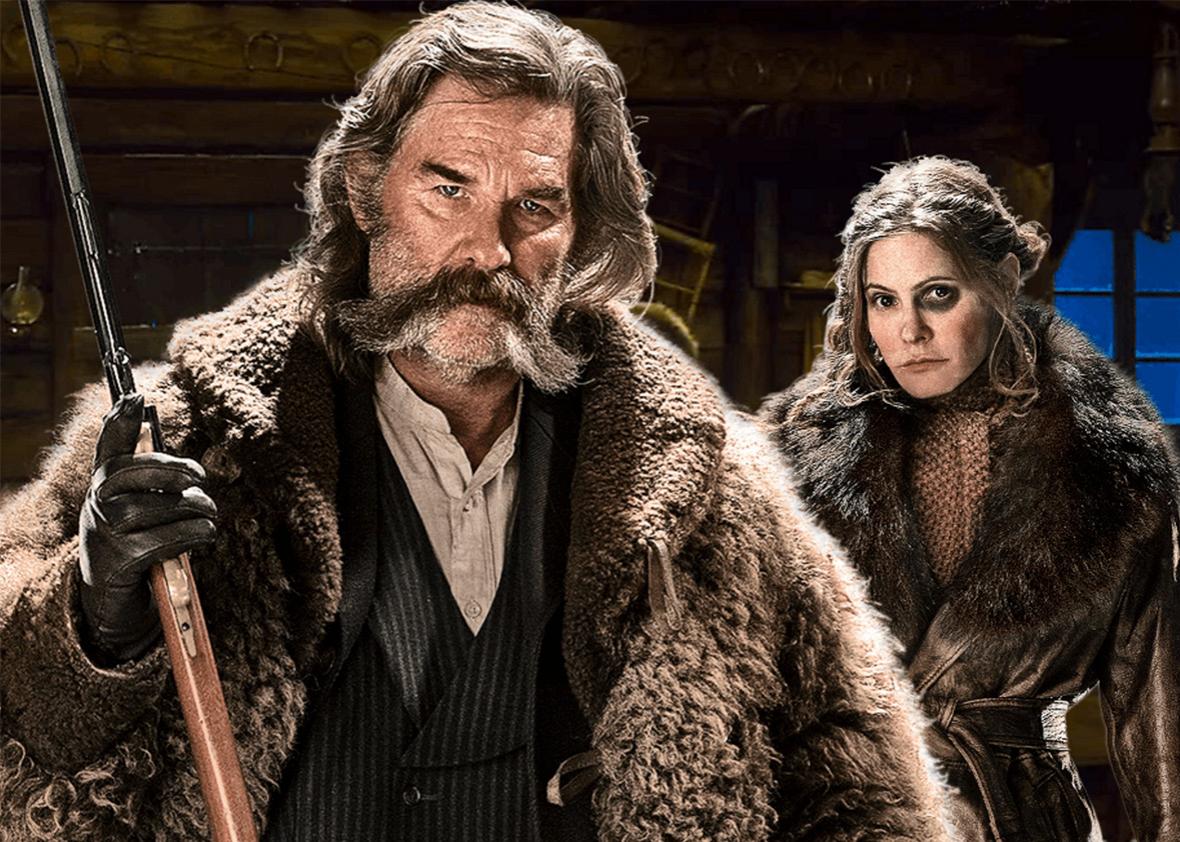 Quentin Tarantino has been found out.  I have long since been over his sole gimmick of ‘quirky conversational’ dialogue, with occasional explosions of exposition, masquerading as masterpieces.  Once again Tarantino has filmed a series of diatribes and monologues, patched them together and dared to call it a movie.  Worse, I honestly think the guy thinks of himself as some type of legendary auteur (‘The Eighth Film of Quentin Tarantino’ it says in the opening credits, was that really necessary, pastiche or not?).  I think he has fooled many others too, he certainly knows how to make dumb people think they’re looking at brilliance.

A great premise is used here.  Various shady characters gather together in Wyoming in the post civil war era, in the midst of a two day blizzard they take refuge in a cabin, before they all complete their journeys to the town of Big Rock.  Among them are Kurt Russell, escorting the varmant Jennifer Jason Leigh to Big Rock for a good old hanging for murder.  Samuel L. Jackson plays the war veteran, so does Bruce Dern (underused) but on the other side, with Michael Madsen playing his own ‘mysterious’ (codeword for Tarantino wanting to cast him, but having no clue for what role).  Tim Roth plays the English hangman, but not a patch on ‘English Bob’.

A lot has been said about the movie being filmed in 70mm and dang, that’s a wide lens.  Curious then that most of the movie is filmed inside a cabin, not exactly fertile ground for the old format.  I guess now we know why the cabin has no rooms.  Worse, the entire first act is filmed inside a carriage, cramped as hell.  I mean it’s nice to see the old format used again, but it’s an odd choice here, are we being gimmicked with this too?

My biggest beef with this  movie is the writing.  Entire TV episodes, indeed, entire movies, could be squeezed into the overwrought waste of screen time in this movie where next to nothing happens. 35 minutes of chin wagging in a horse carriage descends to the 95 minute mark where the gassy dialogue continues inside the cabin.  Then comes a ‘twist’ that confirms that the entire movie up until that point was redundant.  It’s almost like the writer has no idea where he’s going, then finally has a script doctor come in and salvage the mess with the only ‘twist’ CPR routine.  I felt robbed and unconvinced.

Much is made of Samuel L. Jackson’s black character being locked up with a band of rednecks and racists.  The word nigger is used a lot throughout the movie, with Tarantino writing the character strongly as a rebuttal, it’s almost like he’s trying to pen some commentary on the multiracial make up of the emerging United States, but doesn’t quite know what to say.  Instead he plays to the crowd with contemporary shock humour, it turns out that Samuel L. Jackson’s character boasts of having a man perform oral sex on him to his fellow guests, with a graphic flashback accompanying.  Yet while everyone there calls him a nigger, none of them call him a queer.  This may be standard fare in genderless 21st century Los Angeles, but in 18th century Wyoming?  This shlock belongs in a Wayans’ movie, and John Ford is rolling in his grave.

There is stuff to like in here, no doubt.  Kurt Russell is a fine actor with monstrous screen presence, so is Tim Roth. They make the best out of their roles, they help tension simmer, even if the writer doesn’t know when to quit and reorganise.  The movie also looks heavyweight and the blizzard outside throws a thick atmosphere over proceedings. But for that, it’s not enough to make me want to watch this movie ever again.  It’s highly disappointing, a waste of a fine ensemble and I wonder if that weighed on Tarantino’s mind when he pulled those anti-cop and ‘Black Lives Matter’ publicity stunts just as the PR window began in earnest.  Oh yeah, that’s what they were, well timed publicity stunts.

Related ItemsAll
← Previous Story Tombstone Is 25
Next Story → REVIEW: All Is Lost (2013)