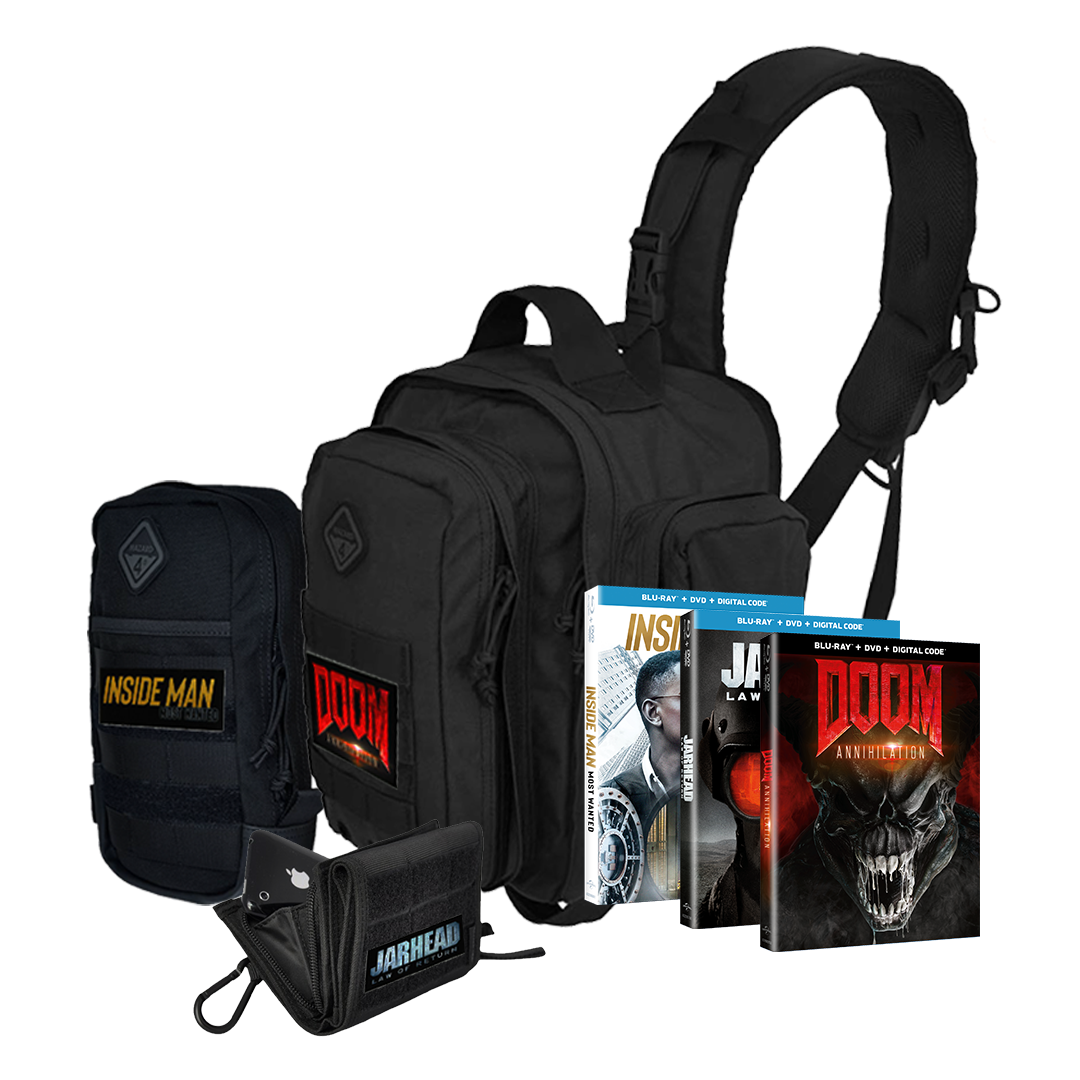 It’s giveaway time again and this week I have three new movies from Universal, Doom: Annihilation, Jarhead: Law of Return and Inside Man: Most Wanted, presented in a special ‘tactical pack’ (pictured) for one American reader.

To win, email jordan@manlymovie.net and reveal what BFG stands for.  Include a name and postal address, the winner will be chosen at random.

ABOUT ALL THREE FILMS

Inside Man: Most Wanted

A suspenseful heist thriller starring Aml Ameen (The Maze Runner) and Rhea Seehorn (Better Call Saul), Inside Man: Most Wanted is a gripping game of cat and mouse that will keep you guessing until the very end. An NYPD hostage negotiator (Ameen) forms an unlikely team with an FBI agent (Seehorn) to save hostages in a skillfully orchestrated copycat crime at the Federal Reserve Bank, led by a ruthlessly cunning bank robber (Roxanne McKee). With time working against them and innocent lives on the line, they must put their professional differences aside before they get trapped in a twisted web of lies.

When a U.S. senator’s son is held captive in Syria, a squad of brave Marines has 36 hours to save him. Own the next action-packed installment in the Jarhead Franchise with Jarhead: Law of Return on Blu-ray, DVD & Digital October 1 [link in bio]

Major Ronan Jackson (Devon Sawa), an accomplished fighter pilot for the Israel Defense Forces and son of a U.S. Senator (Robert Patrick), is shot down while flying through Syrian airspace. After miraculously surviving the crash, Jackson is taken captive by a group of Hezbollah militiamen. A gripping and powerful story packed with hard-hitting action, Jarhead: Law of Return follows a squad of Marines, led by Sergeant Dave Flores (Amaury Nolasco), as they risk their own lives in the hopes of saving an ally they’ve never met.

Based on the popular original video game, Doom: Annihilation is an explosive, terrifying thrill ride. On the darkest moon of Mars, scientists have found an ancient portal which allows teleportation throughout the universe. Considered to be mankind’s greatest discovery, it’s actually a gateway from hell, unleashing a swarm of demons looking to steal the souls of everyone who gets in their way. It’s up to Lieutenant Joan Dark and an elite unit of Marines to destroy an ever-growing horde of bloodsucking and soul-stealing beasts and prevent them from taking over planet earth.