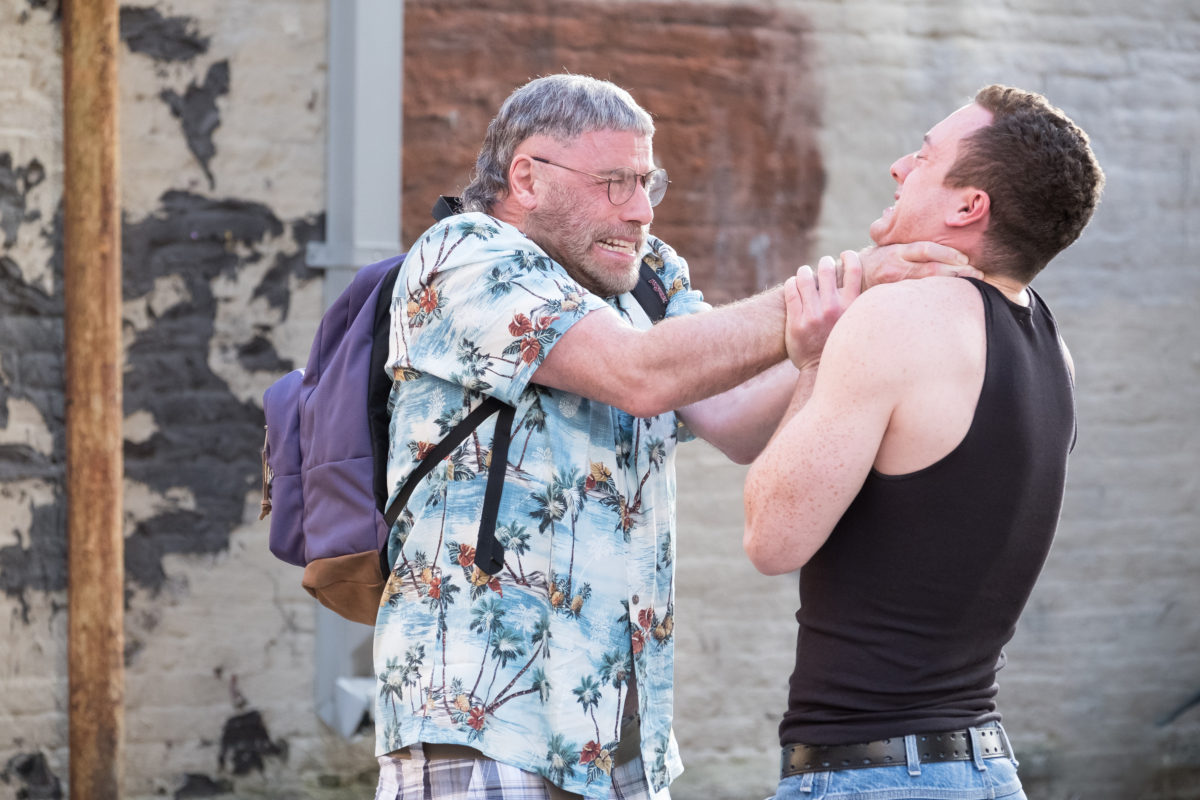 John Travolta plays Moose, a dangerously obsessive movie fan in the mildly diverting thriller, The Fanatic. Moose is a super fan of faded B-movie action star, Hunter Dunbar (Devon Sawa). As an avid autograph collector, his small apartment is chock full of collectibles items and movie memorabilia. To fund his hobby, Moose works as a street performer on Hollywood Boulevard. For his act, he dresses up as a 19th century London police officer and says corny lines in a silly English accent.

One of Moose’s chief goals in life is to get Hunter Dunbar to sign his prized movie souvenirs. When Dunbar appears for a book signing, Moose attempts to get his autograph finally. However, at the signing, Moose is rudely brushed off by Dunbar. Unfazed, Moose enlists the help of his cute photographer friend Leah (Ana Golja). She tells him about an app called ‘Star Maps,’ which shows the addresses of various celebrities living in Hollywood. Using this app, Moose locates Dunbar’s residence and plans to drop off a letter. As Moose drops the message off, Dunbar sees and confronts him. He calls him a pervert and tells him to leave his neighborhood. Humiliated and insulted, Moose gradually escalates his obsession with Dunbar to full-fledged stalking and starts breaking into Dunbar’s mansion. As the situation worsens, this leads to a bitter end for both men.

The Fanatic is written and directed by Limp Bizkit lead singer, Fred Durst. He convincingly showcases the dangers of fanatical obsession and the importance of appreciating fans.

As for the performances, thankfully, Travolta does not overdo the eccentricity of his character. But one wonders how thespian extraordinaire, Gary Busey would have fared. It would have been far more entertaining.

Devon Sawa is miscast as Hunter Dunbar, a part that needed a much older actor. Dolph Lundgren would have been a better choice for the Hunter Dunbar role, as he would have brought more authenticity and presence.

One of the more interesting lines in the film is when Moose is reading a screenplay in Dunbar’s home and says, “that’s not a good script, he should not do it.” This quote can be directly applied to Travolta himself, as he has starred in some tripe lately.

The Fanatic is a decent timewaster, certainly one of Travolta’s least rotten recent films. If you like movies like One Hour Photo (2002) or The Fan (1996) you might want to consider digitally renting this one.