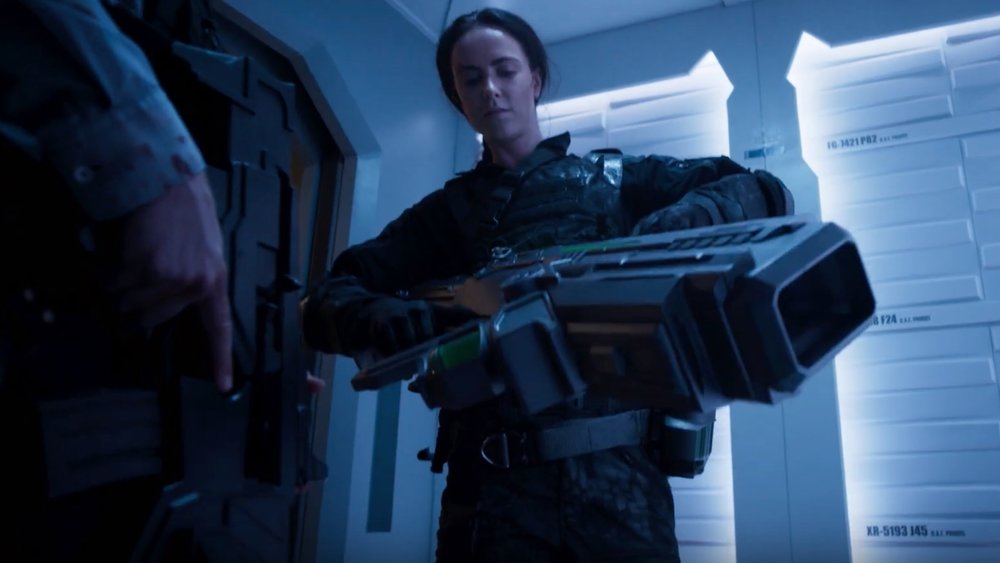 The UAC has a secret research base on Phobos, a moon of Mars. Their research led them to discover ancient Sumerian ruins. These ruins, resembling two large circular slabs of rock, are a gateway between worlds and correctly activated, can teleport humans between Phobos and Earth. Unfortunately, this gateway opens a dark dimension of fire-breathing alien monsters, who enter the facility, brutally maim scientists and infect the remaining staff with a virus that turns them into zombies.

As the chaos erupts on Phobos, a transport ship containing a crew of UAC Marines arrives. The marines are there to secure the base and protect the facility. Upon landing, they find the lab offline. After breaking in, the crew discover mutilated bodies, decapitated heads and baffling Sumerian writings, displayed prominently in blood on the walls. Searching the facility, the marines encounter zombies, who viciously bite and attack them, seemingly at random. In addition to zombies, the soldiers face creatures that look like humans turned inside out and who expel Street Fighter style ‘Hadoken’ fireball projectiles.

When I first heard about Doom: Annihilation, I feared it would be as low budget as Roger Corman’s Carnosaur 2 (1995) which featured rubber and foam dinosaurs. Thankfully, the visual effects are half-decent, the fire and lava planet shown briefly near the end is well realized.

Doom: Annihilation is a cross between Resident Evil (2001) and Ghost of Mars (2001). Like both those movies, Doom features flesh-eating zombies, a crew of wisecracking soldiers and a strong female lead. This ‘Resident Evil on Mars’ premise sounded promising, but the movie felt like a filler episode of a forgettable TV show on the Syfy channel.

Amy Manson as heroine Joan Dark is miscast. She is too petite, unintimidating, and has no screen presence to carry the movie. The film needed a stronger lead actor, even a wrestler like Brock Lesnar or Chris Jericho or someone similar would have sufficed. At least they would have looked more believable picking up and wielding the massive BFG (Bio Force Gun). The best acting in Doom comes from Dominic Mafham who puts in a hammy performance as mad scientist Dr. Betruger.

Doom: Annihilation is simply a mediocre video-on-demand (VOD) release, though I’ve definitely seen and paid for worse VOD films this year. Nonetheless, I would not recommend Doom: Annihilation unless you are desperate for a zombie action movie or like Mars-related science fiction movies.