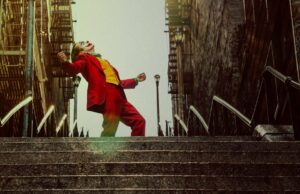 There are a shitload of reasons why this movie is getting criticized & would not be liked by certain moviegoers. Those complaints might be  that it’s just another comic book movie in a long line of comic book films or that it is a comic book movie that doesn’t feel like a comic book movie, it’s too slow, doesn’t have enough action or some are saying it’s too violent, it’s not a Marvel movie , white man gets mad and kills people ,etc etc etc

But I loved this fucking movie. For those that hate comic book movies or are experiencing “comicbookmovie fatigue” there’s not  a superhero in sight & there is no CGI action.

I’ll try to review this movie giving away as little as possible.  Joaquin Phoenix plays the title character of Arthur Fleck, a man who lives with his mother in a shitty apartment in Gotham City in the year 1981. Sanitation workers are on strike and the garbage is not being picked up in the city, the crime rate is high as well as the unemployment numbers. Arthur takes care of his ailing mother & works sporadically as a clown for various events. Arthur suffers from mental health issues and seeks treatment through government programs and surprise surprise, the government programs are shit and ran by people that don’t know and don’t give a shit. Author loses his treatment and his various medications. Arthur dreams about being a stand-up comedian and idolizes Murray franklin ( Robert De Niro) the host of his favorite late night comedy show.

In the graphic novel “The Killing Joke” Joker says “That it only takes one bad day”. One bad day to make a man go from sane to insane, from good to bad. Here Arthur’s life has been pretty shitty from the get-go. We pick up Arthur’s story at a breaking point in the man’s life. And we see Arthur go deeper and deeper into madness and darkness.

Joaquin Phoenix is fucking brilliant in his role, he delivers a tour-de-force performance. From his physicality, from how much weight he lost, to his mannerisms, from how he talks and looks and stands & laughs, it all serves a purpose. Phoenix brilliantly depicts the downward spiral of a man that will rise to one day become “The Crown Prince of Crime”.

The rest of the cast is very effective as well. I liked how they connected The Wayne family especially Thomas Wayne into this story and this incarnation of the character of the Joker.

Brett Cullen plays Thomas Wayne here and I liked how he played the role. I liked the fact that Wayne wasn’t played like a goody two-shoes, champagne socialist preaching your usual run- of-the-mill political shit. On a TV interview, Wayne would refer to people that resent successful people like him and resent those that do well for themselves as “Clowns”. He is running for mayor & his comments will set certain things in motion. Cullen is a reliable character actor that has been around seems like forever so this film hopefully increases his profile a bit cuz he deserves it.

Todd Phillips famous for directing “The Hangover” trilogy does a really good job in this movie. He was heavily influenced by two of Martin Scorsese films. Martin Scorsese’s “Taxi Driver”

and “king of comedy”

There are various nods to those films throughout this movie, from camera shots to casting. But like I mentioned before in previous reviews, nothing wrong with emulating or striving to be in the same league as great manly classics.

This movie is a slow burn, takes it’s time building tension & character build up, so some action fans might be disappointed but I wasn’t. I like how some things are left up to interpretation & I love the third act of this movie.

I wished DC Comics will take this approach to more of their movies now. Nowadays is all about cinematic universes. The problem with that is that all the movies have to fit in together,  happen at the same time and all have the same tone. As far as I’m concerned, no need to watch The Dark Knight hanging out with fucking Aquaman in a big budget mess.

This is a gritty movie that takes place in the early 80s in the urban jungle , that features a great performance by it’s lead actor, that is well directed and it’s rated R.