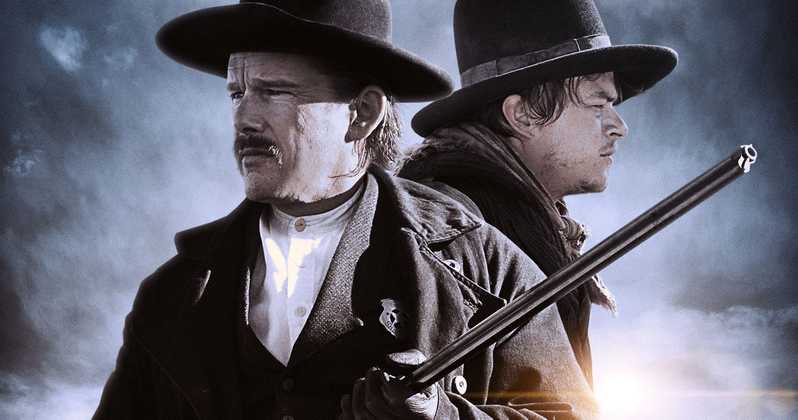 Ethan Hawke stars as Pat Garrett, and Dane DeHaan stars as Billy Bonney in The Kid, an engaging and compelling Western from actor/director Vincent D’Onofrio.

The movie opens with 14-year old Rio Cutler (Jake Schur) shooting and killing his abusive father, who had just murdered his mother. Shortly after, some men, including Rio’s Uncle, Grant (Chris Pratt), arrive. After seeing his brother lying dead, Grant flies into a murderous rage and attempts to kill Rio and his older sister, Sara (Leila George). Rio manages to escape after stabbing his Uncle with a penknife. Rio and Sara then flee their family home, determined to head to Santé Fe, New Mexico, to stay with one of their aunts.

While on the run, the siblings run into Billy ‘The Kid’ Bonney (Dane DeHaan), an infamous outlaw. Instead of killing them, Billy takes a shine to Rio and decides to protect him and his sister. Billy’s freedom is short-lived as Sheriff Pat Garrett (Ethan Hawke) has been tracking Billy and arrests him. Garrett aims to take Billy to prison for hanging. Since Garrett’s trip takes him past Santé Fe, he agrees to take Rio and Sara along. On the journey, Billy develops a bond with Rio and treats him like a younger brother.

Uncle Grant eventually catches up with the siblings and kidnaps Sara to force her into prostitution. To rescue his sister, Rio must free an imprisoned Billy.

The Kid features solid acting from everyone involved. Dane DeHaan, as Billy the Kid, in particular, is a standout. He convincingly portrays a reckless criminal, whose only thoughts are either shooting at someone or running from the law. His performance is reminiscent of a young Leonardo DiCaprio. Chris Pratt is also exceptional as the evil Uncle and appears almost unrecognizable with a full beard. As Rio, actor Jake Schur is sympathetic and likable as a youth who is forced to take on a great deal of responsibility.

The action in this movie is well-staged and choreographed. Shootouts are bloody, brief, and unsentimental.

While the film can seem downbeat or depressing at times, it is foremost a story about survival, courage, and family. The Kid is also not a revisionist western, more of a traditional western that would not seem out of place with Randolph Scott or Joel McCrea as leads.

Vincent D’Onofrio has written and directed an entertaining Western, well worth a video-on-demand rental or purchase.