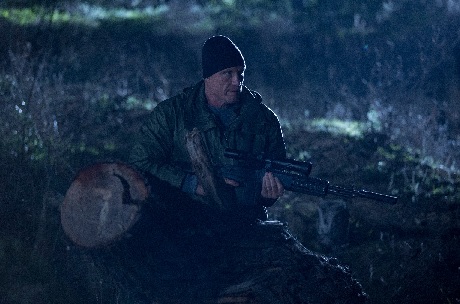 Some years later, Aiden receives a call from a detective from the Taranto Police Department, who informs him that there’s new information about his family’s kidnapping. Arriving in Italy shortly after, Aiden discovers his contact recently committed suicide. Frustrated, Aiden starts investigating on his own and finds out that local cops have been aiding the criminals who killed his family. With this revelation, Aiden must use his hunting and tracking skills to get justice.

In Giorgio Serafini’s The Tracker, I appreciated that Dolph’s appearance was more than a cameo. Many former Hollywood stars like Bruce Willis, Steven Seagal, and Sylvester Stallone essentially guest star in their video-on-demand releases. Dolph is featured prominently throughout this movie. However, he does share some of his screen time with Marco Mazzoli, who plays Inspector Graziani. Thankfully, Marco is not irritating.

Dolph still has screen presence and is more believable as a tough guy than 99 percent of all millennial actors. Nonetheless, his age has caught up with him. His lack of agility and quickness are apparent, and he appears clumsy and slow in fight scenes.

As for the movie’s action, it is pretty unremarkable, except for a pretty hilarious use of the Wilhelm scream after a bad guy falls off a balcony. There is also the amateurish use of computer-generated gunfire and muzzle flashes.

I’ve seen dozens of terrible video-on-demand movies this year, Dolph’s film stands out as a better than average star vehicle. The film’s short run time (80 minutes) also prevents it from getting too dull or cause viewers to lose interest.