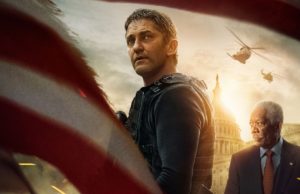 Most people have settle into their 4K televisions by now.  The eyes have adjusted from 1080p to 2160p for most of us.  Every now and again though a new release like this really intoxicates the eye!  This film is derived from a 4K source (almost, derived from a 3.4K source… but still) through a 4K digital intermediate.

So pretty is the quality of Angel Has Fallen, it’s hard for me to visualize a better image quality for a motion picture.  Probably only through an extraordinarily expensive television.  The film boasts deep blacks and vivid life color, even in scenes that have cinematographic drabness.

When you’re done with the main feature, there are around 80-90 minutes of extras, which combined with the movie should keep you busy for a night.  Although sadly none of them are in 4K.  The 1080p version of the movie, along with a digital copy, are also present.