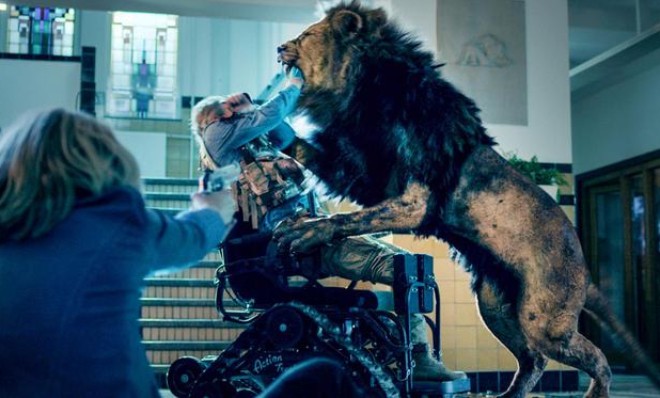 What to Expect:  A killer lion rampages in Amsterdam, and only a hunter in a wheelchair can stop him.

Dutch director Dick Maas directs the adequate horror-comedy, Uncaged, about a man-eating lion on the loose in Amsterdam.

The lion’s killing spree begins when a teenage girl, her boyfriend, and the rest of her family are hunted and attacked at their home on the outskirts of Amsterdam, Netherlands.  The unique brutality of the murders inspires the police to call Lizzy Storm (Sophie Van Winden) a veterinarian from the Amsterdam Zoo.  After viewing the gruesome remains, Lizzy concludes the perpetrator is not a human but a lion, much to the disbelief of the detectives on the scene.

Lizzy takes her concerns about the lion to the Amsterdam Police Chief and urges him to tell the public.  As a result, the Amsterdam police hold a press conference, informing people about the lion attacks.  However, the announcement falls on deaf ears and is mocked by a skeptical press.

After a series of lion attacks, the police determine the animal’s new stalking ground is in Vondel Park.  The police chief hires his dimwitted nephew, an aspiring big game hunter, to track and eradicate the lion.  However, his nephew acts more like Jack Black in Jumanji than Allan Quatermain in King Solomon’s Mines.  When the lion slaughters him, Lizzy recommends Jack DelaRue (Mark Frost), a professional hunter from England.

After Jack is employed, the police are shocked to discover he uses a wheelchair.  Jack has a customized battery-powered wheelchair with a caterpillar track for propulsion, allowing him to travel and hunt outdoors.

With this new hunter in place, Amsterdam has a chance to rid themselves of the monstrous menace who has been terrorizing the city like an escaped serial killer.

Despite its budgetary limitations, Uncaged features impressive gore and special effects.  The computer-generated lion used is passable enough, better than the usual Syfy Channel original productions.  Uncaged also features an exciting action set-piece, when the lion attacks passengers aboard a city tram car.  The scene uses a mix of CGI, animatronics, and puppetry to create a nightmarish situation.

As for the acting, Uncaged is saddled with a clumsy and annoying performance from Julian Looman as Dave, Lizzy’s ex-boyfriend.  Mark Frost fares better as Jack and brings a much needed charismatic spark to the movie.  His character should have been introduced much earlier.

Horror-comedy is a difficult genre to pull off, and director/writer/composer Dick Maas makes a bold attempt.  Nonetheless, the comedic elements woven throughout, like the imbecilic hunter, create an inconsistent tone.  Another misstep is the fact that kids are shown being slain by the lion, which may be unpalatable for some audiences.

Uncaged is overall an average Euro-horror movie, worthwhile checking out if you are not in the most demanding mood.