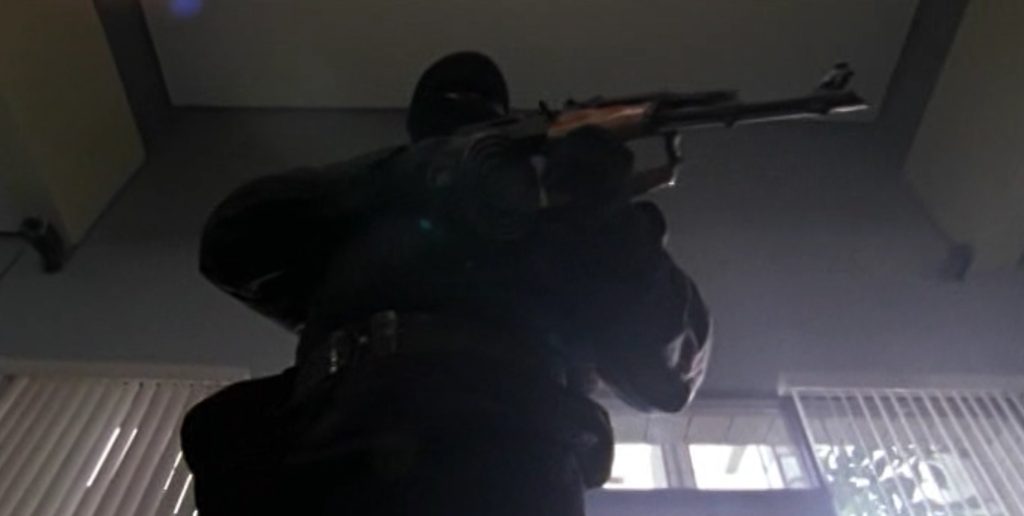 In 1997 two fellows decided to rob a bank, armed with Chinese AK-47s (Type 56s) assault rifles and Heckler & Koch battle rifles. Planning and tactics weren’t high on their agenda, instead, body armour and thousands of rounds of ammunition were.  Of course, our masterminds wound up dead, but only after a 44 minute shoot out described as one of the ‘Bloodiest events in American Police history’.  And yes, this actually happened.  Also, you know what? They made a movie about it.  Starring Michael Madsen and Ron Livingston (with Dale Dye), it was supposed to be gritty, chilling and serious.  But this is a movie I found downright hilarious, the type of hilarious where people demand to know why you’re laughing at the top of your lungs.

In this movie, Larry Eugene Phillips Jr. is played by Andrew Bryniarski and the second gunman, Emil Mătăsăreanu is played by Oleg Taktarov.  Taktarov, you may remember, appeared in Predators, while Bryniarski played Leatherface in the 2003 remake of The Texas Chainsaw Massacre.  Why these two were cast in these roles baffles me but I have to say that their acting skills are… questionable, with Bryniarski in particular coming across like a bank robbing version of Zangief from the 1994 movie Street Fighter.  This is in contrast with Michael Madsen, Mario Van Peebles and especially Ron Livingston as their thespian nemesis cops playing it straight as a rod. It doesn’t jive, and it’s kind of humorous.

So our heroes, wisely stripped of dialogue in the movie (except for functional instructions such as ‘hurry up bitch’) by the director, are the type who like working out, admiring Porsche automobiles and hating on pig cops.  As they head out to hit an armoured truck, they find it off-schedule.  Instead they impulsively decide to knock off a nearby bank.  In broad daylight, two hulking men in balaclavas, armed with assault rifles and carrying bags containing thousands (and thousands!) of rounds of ammo stroll casually towards the bank. Instantly, this inconspicuous attire draws the attention of a squad car — they’ve been made before they even enter the building.

Up until this point the movie had been kind of dragging its feat with grim cop melodrama, with Madsen looking bored and forgetting his lines.  But after the heist starts, the fun begins.  Upon entering the bank, this pair of meatheads begins doing their favourite thing in the whole world – firing their beloved weapons on full auto.  Now if you were to rob a bank, what would you do after entering the building (caveat, you must not have done boring tasks like recon it like the movie versions of Emil and Larry)… do you take an inventory of exits and people etc?  Not these guys, the first thing they do is fire 200-300 rounds of ammo into the walls and ceiling.  This is Larry and Emil’s version of a single warning shot; if 300 rounds doesn’t sound like much, to set the scene, the second floor starts to buckle and ceiling begins to collapse.  This is before they’ve even asked for money!  John Matrix would recoil in horror at the overkill. Soon, the entire building has been surrounded by half of continental America’s police – who would’ve thought that discharging hundreds of 7.62 rounds into the ceiling downtown by yelling maniacs would’ve drawn such attention?!  And it takes our bandits a while to realise this but, you understand, these are not criminal masterminds.  After stealing money, they exit the building to confront the ‘pigs’ and next, one of the most surreal things I’ve ever seen in a movie begins.

Larry and Emil stand in front of the bank and fire their drum-fed Type 56s on police.  Basically, until the end of the movie!

Actually I tell a lie, they briefly go back inside the building with a discombobulated Taktarov firing on a safe he’s having trouble opening (on uh, full auto).  Then it’s back to the street with both men standing in one position, firing like madmen on cars and even news helicopters.  ‘C’mon, pig!’, taunts one of them, as he pulls out a Heckler & Kock HK-91 battle rifle to up the ante.  Very surreal and to be honest, very amusing, like villains from a McBain (from the Simpsons) movie. Or even better, a ‘rampage’ from a GTA game.  They fire so many rounds that technically, their AKs should’ve caught fire by the barrel.  It happens.  The real fight had 2,000+ rounds discharged between cops and robbers, but here it’s surely 10,000+!

At one point in the movie, Michael Madsen does his starry-eyed musing thing where he recalls that they were involved in a previous robbery and got away, ‘disappearing into the wind’.  And I was like really?  You lost those two geniuses?!

Gentlemen, this movie starts slow  and the real life crims were probably more intelligent.  But it’s a fuckin’ blast when the shit starts and goes down!