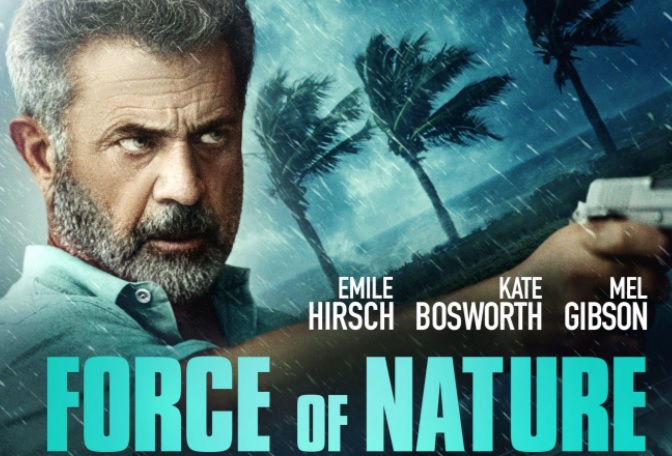 Run Time:  90 Mins
Rated: R
What to Expect:  A banal ‘thriller’ set in a dilapidated apartment complex
Randall Emmett and George Furla produce yet another routine action movie in Force of Nature.   The film stars Emile Hirsch, Kate Bosworth, David Zayas, and features Mel Gibson in a supporting role.  Director Michael Polish did not polish this film’s script.  Neither the actors nor the production crew bothered to put in much effort.
A category four storm approaches the city of San Juan, Puerto Rico.  San Juan Police Officer Cardillo (Emile Hirsch) searches for anyone in town who has not evacuated yet.  Accompanying him is Jess Pena (Stephanie Cayo), a gorgeous policewoman eager for career advancement.
After Cardillo gets a call to deal with a minor scuffle, the assailant, Griffin (Will Catlett), mentions that two people at his apartment have not fled to safety.  Those two people are a cranky retired detective Ray Barrett (Mel Gibson), and another older man, Bergkamp (Jorge Luis Ramos).  Cardillo finds Barrett with his daughter, Troy (Kate Bosworth), who wants to take him to the hospital.  Ray is on a dialysis machine.  When the storm hits hard, it will knock out power to the building.
A violent robber nicknamed John the Baptist (David Zayas), and his three crew members arrive at the same apartment.  They plan to retrieve some valuable art they believe is in Bergkamp’s possession.  John’s specialty is high-end heist jobs.  With the storm raging outside and cut off from outside assistance, Cardillo, and company square off against brutal thugs who want them dead.
Mel Gibson uses a screwy New York accent for his character, Ray Barrett.  Gibson fills in for the role Bruce Willis usually plays in Emmett/Furla productions.  However, he puts more energy into his performance than Willis, adding some vigor to the proceedings.
The special effects of the storm are pitiful.  The hurricane itself looks too mild, less a full-blown rainstorm, and more like spraying someone’s house with a garden hose.  Puerto Rico, as a filming location, is not well utilized.  Since 95 percent of the film is in an apartment complex, the whole movie could take place in Vancouver with drone camera footage of San Juan substituting for exterior shots.
If you are looking for a heist film set during a storm, you are better off with Hard Rain (1998), a terrific Christian Slater led action-adventure.  As for Force of Nature, it is not recommended for either digital rental or purchase.