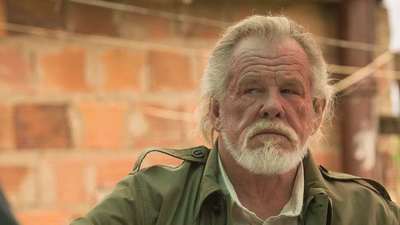 Retired U.S. Marshall Nemes (Nick Nolte) is hunting the ‘Padre,’ Clive Lowery (Tim Roth), an English con-artist and pick-pocket, in rural Colombia.  Clive masquerades as a Priest.  Nemes has enlisted a local cop, Gaspar (Luis Guzman), to assist him in trapping the fraudster.

Lena Jimenez (Valeria Henriquez) is a street-smart teen girl who lives in the village of Concepción.  She is desperate for a passport so she can visit her 12-year-old sister in Minnesota.  Lena sells knockoff gold watches to tourists in her spare time to earn extra money.

When Clive spots Nemes in Concepción, looking for him, he decides to make a quick getaway and steals a car.  What Clive does not realize is that Lena has snuck aboard.  Lena wants Clive to help her with a heist she is planning.  Bitter towards the Catholic Church for letting her sister be adopted, Lena wants to steal a prized cup from a Church, worth thousands of dollars.

It is good to see Nick Nolte, at 79 years young, still playing a tough-guy and delivering another professional performance.  Tim Roth acts well as the cynical and sarcastic con-man who forms a collegial relationship with Lena after some initial distrust.  Valeria Henriquez is engaging as Lena and is not an obnoxious teen.  However, she looks too middle class to be convincing as a poor orphan.

Director Jonathan Sobol keeps the film at a steady pace, never letting the movie drag or get too dull.  Nonetheless, the film suffers from a rushed ending.

If you are looking for a breezy drama/thriller, The Padre is a simple but effective story about two hustlers/fugitives looking to score big and avoid arrest.  This film is recommended for digital rental or purchase and is available on VIMEO on Demand.