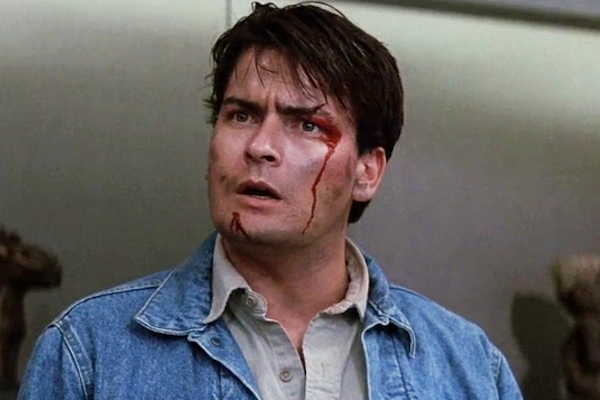 Runtime: 120 Mins
Rated: R
What To Expect: “We have police brutality reports coming in all over the place!”
This is it.  This is the movie that turned Charlie Sheen into a fucking man, back in the day anyway.  Young Guns?  Nah.  Platoon?  Forget that whining introspective shit.  In The Rookie Sheen lets rip, showing signs of raw, alpha, winning.  Sheen even tames two Rottweilers, then two Pittbulls.  Sheen gets assaulted at a bar, returns to the scene of the incident and beats up 15 men, then burns the whole place to the fucking ground.  This may even be Sheen’s best movie, not for a second does he miss nailing his role. If anything, my only regret is that we didn’t see more of this type of role for Sheen.  They could’ve easily made this into a franchise.  To make up for it, there’s always his cold-blooded execution of one of the main villains in front of dozens of witnesses.
The other half is is Eastwood.  In The Rookie, Eastwood is even better than Sheen.  Here, Eastwood tears through the streets of L.A. with reckless disregard like the grandson of Will Munny himself.  Within four minutes of the movie opening, Eastwood is stepping over a dead body and already has a black eye.  I also love the dialogue, and Clint’s delivery of it.  Take one exchange between Eastwood and a villain:  “Fuck you”.  “Fuck YOU” comes the retort, shades of Schwarzenegger and Bill Duke’s acting in the hotel room in Commando, before an enraged Eastwood pummels and executes the pissant.  Eastwood is in Dirty Harry mode here, if not even more ruthless.  Only Eastwood could get kidnapped, then end up in sex tape with one of his captors.
Being a buddy-cop movie from 1990 – and by the way, what a fucking year for Manly Movies (And sequels!), I expected a healthy dose of violence.  And The Rookie delivers.  The film opens with a murder, complete with squib, and ends with two cold-blooded executions.  I love how both Sheen and Eastwood handle the villains at the end.  Bronson would be proud.  Y’see, not only does Eastwood execute an unarmed villain in front of witnesses and not face charges – he gets promoted!  In fact The Rookie is one of the stiffer buddy cops, maybe even more violent than Lethal Weapon.  The action is also, in true style of the time, well handled.  You enjoy the action because you can see it, the director knows how to feed it to you.
I’m telling you this thing is manly as fuck, if you haven’t watched it in many years, you’ll be amazed at how well it has aged.