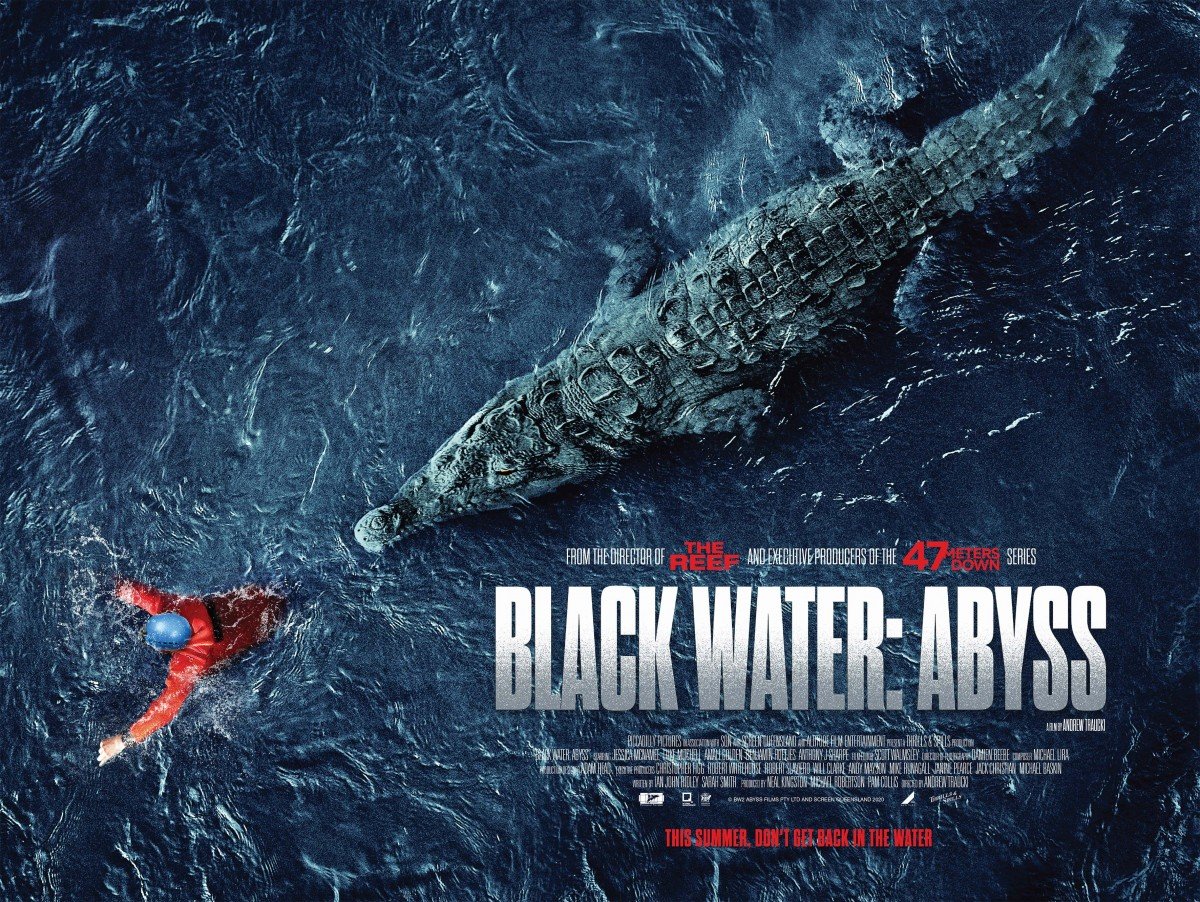 Run Time:  98 minutes
Rated:  R
What to Expect:  A monstrous crocodile kills off a team of cavers in this bland horror movie

Andrew Traucki directs the just passable Australian killer crocodile film, Black Water: Abyss (2020).  For those looking for an exciting horror thriller set in a cave system, look elsewhere.  The film is more boring than bone-crunching.  Better suggestions include The Descent (2005), The Decent: Part 2 (2009), Rogue (2007), or even The Cave (2005).  Even Lake Placid 2 (2007) and Lake Placid 3 (2010) are better options for those looking for nudity and bloody crocodile attacks.

The film takes place in a jungle territory in Northern Australia.  Five spelunkers, Jennifer (Jessica McNamee), Eric (Luke Mitchell), Yolanda (Amali Golden), and Viktor (Benjamin Hoetjes) and their mutual friend Cash (Anthony Sharpe) want to explore a hidden underground cave.  To reach the entrance, they rappel down through a hole in the jungle floor.  While traversing this wild space, the weather turns terrible above ground.  A thunderstorm rages and the ensuing rainfall pours in, trapping the group in an isolated section.  They soon discover there is a fearsome crocodile with them.  As their surroundings flood with water, one of the group, Victor, is mauled by the crocodile.  The enthusiasts now have to find a fast way out of the situation while avoiding becoming easy prey.

Black Water: Abyss revolves around two universal human fears:  the fear of drowning and the fear of being devoured alive.  The idea of becoming trapped in a watery cave with a crocodile is terrifying.  However, the film’s execution is far more mundane.  The spelunkers spend most of their time idling on dry rocks, before being eaten by the sole crocodile in the water.

Regarding the movie’s visual effects and production, the crocodile and the cave set looked realistic, not some CGI abomination.  Nevertheless, I wished for more crocodiles, as this would lessen the film’s low-budget feeling.

Black Water: Abyss is a decent enough attempt at a monster movie.  If there were a follow-up, I would recommend more crocodiles and no Final Girl trope.

If you are looking for an independent creature feature, Black Water: Abyss may be of interest to you.  However, check out the trailer first before you make a digital rental or purchase.