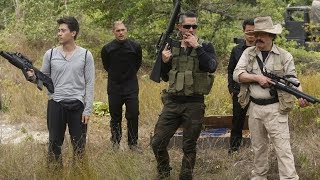 Run Time:  93 minutes
Rated:  R
What to Expect:  Surviving the Game, Cambodia Style
Director Jimmy Henderson steps into the ‘man hunted for sport’ genre that encompasses movies like Hard Target (1993) and Surviving the Game (1994).  Despite the rehashed theme, The Prey is bloodthirsty and brutal.
In Phnom Penh, Cambodia, an Interpol agent named Xin (Gu Shangwei), works undercover to unravel and dismantle a Mafia phone scam targeting Chinese citizens.  When local police raid the Mafia hideout, Xin is arrested and taken to the Western Region Penitentiary.  This jail is near an international neutral zone, a lawless jungle territory.
A sadistic Warden (Vithaya Pansringarm) oversees the correctional institute.  When Xin’s Interpol colleagues try to get him released, the Warden lies and tells them he has not heard of him.  Gangs target Xin; he has to depend on his martial arts abilities to defend himself.  By fighting back, the Warden punishes him.  He is placed upside down, tortured, and given electric shocks.  The Warden takes inordinate pleasure in brutalizing him.
In addition to sadism, the Warden is also corrupt.  For a large sum of cash, wealthy hunters from Thailand come to the jail to pick ten prisoners to hunt.  One of these inmates is Xin.  The neutral zone is the staging area for this blood sport.  In a clearing that borders the jungle, the stalkers shoot the convicts with high-powered rifles.  Out of the ten men chosen, three make it to the open wilderness.  Without a weapon in hand, Xin has to endure long enough to turn the tables on his pursuers.
As Detective Xin, Gu Shangwei makes a bland, leading man with an uninspiring presence.  Nonetheless, he does have some decent fighting skills.  Vithaya Pansringarm, a veteran Thai Actor, is exceptional as the cruel villain.  However, I wished his character received an even worse death in the movie.
A key action highlight is a hand to hand fight in a shallow riverbed, climaxing with Xin bashing a correctional officer’s head in with a rock.
While Jimmy Henderson does not have the creativity or style of director Gareth Evans (The Raid), The Prey is a tolerable action-thriller, breathing life into a tired premise.  It is recommended for digital rental or purchase and fans of Van Damme’s earlier films.
6/10
By:  John Matrix
Related ItemsAll
← Previous Story REVIEW: BLACK WATER: ABYSS (2020)
Next Story → REVIEW: DAS BOOT (2018) A NEW (WOKE) LOW