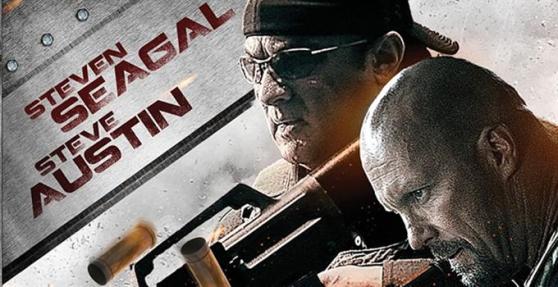 The normal response to a new Steven Seagal DTV (or any Steven Seagal DTV) is to write it off as a movie not worth watching, with the mainstream especially trashing such entries in his career.  Maximum Conviction (2012) has been trashed by critics and internet users alike.  However I take the view that it isn’t as bad as they say, certainly not a 4.8/10 as rated by the IMDb.  I thought as much then, and even slightly more now.  It is, actually, solidly average as opposed to horrifically bad.

The movie sees the decommissioning of a large prison complex, which means that violent criminals must be moved out, which is makes it a dangerous operation.  And so former black ops operatives Steven Seagal and Stone Cold Steve Austin are hired to direct the shut down.  In the middle of the affair, a team of mercenaries (led by the fucking awesome and underrated Michael Pare) posing as Marshals attempt to kidnap two important inmates.  They kill anyone who gets in their way.  But they don’t reckon on the two brick shit house Steves throwing a spanner in the works.

This is a Voltage Picture affair, directed by Keoni Waxman, with a modest budget.  It was DTV.  It shouldn’t be sufferable, let alone watchable.  And yet it is.  But first, to get some of the negatives out of the way.  While the movie has decent pacing, it makes the mistake many a DTV/VOD effort does – runs a mite too long, becoming a bit tedious by the film’s end at one hour and forty minutes… 85 minutes would’ve done it, given the limitations of the story.  Also, Waxman does not do the fight scenes justice, remember, this was at the height of shaking cam/spaz editing, so key punches etc actually happen recklessly out of frame.  Not good.

On the up side… the movie manages to cover its lowly budget quite well.  I mean, did you know that this film shared some of the same shooting locations as Man of Steel?  Yes, but they were kicked out when Henry Cavill and company showed up… importance and all that.  Waxman directs a quite serious action/thriller that focuses on kinetic movement and violence and keeps the shitty spy subplot to a minimum.

The two Steves are in the movie too, there are no DTV cameo cons here.  Seagal has numerous fight scenes, some of them fairly satisfying.  I also love some of the brutality on display in this B-Movie.  E.g. in other shows, the hero will often knock out two guards before moving on, leaving the viewer to question what will happen if they wake up.  This problem is addressed by Seagal in this show; after beating two guards unconscious in a fight, he lifts their radio to taunt their colleagues, before two gunshots ring out as he executes them, even though they were incapable of fighting back.  Yeah… not sure that’s entirely legal, Steve.

I felt close to giving this movie a 7/10, what with Seagal’s extended presence, Steve Austin’s acting and Michael Pare’s excellent and thoroughly convincing villain.  Not to mention Aliyah O’Brien’s ass.  Gotta give it a 6 though… I just want to highlight that it’s not that bad, not claim that it’s anything special.