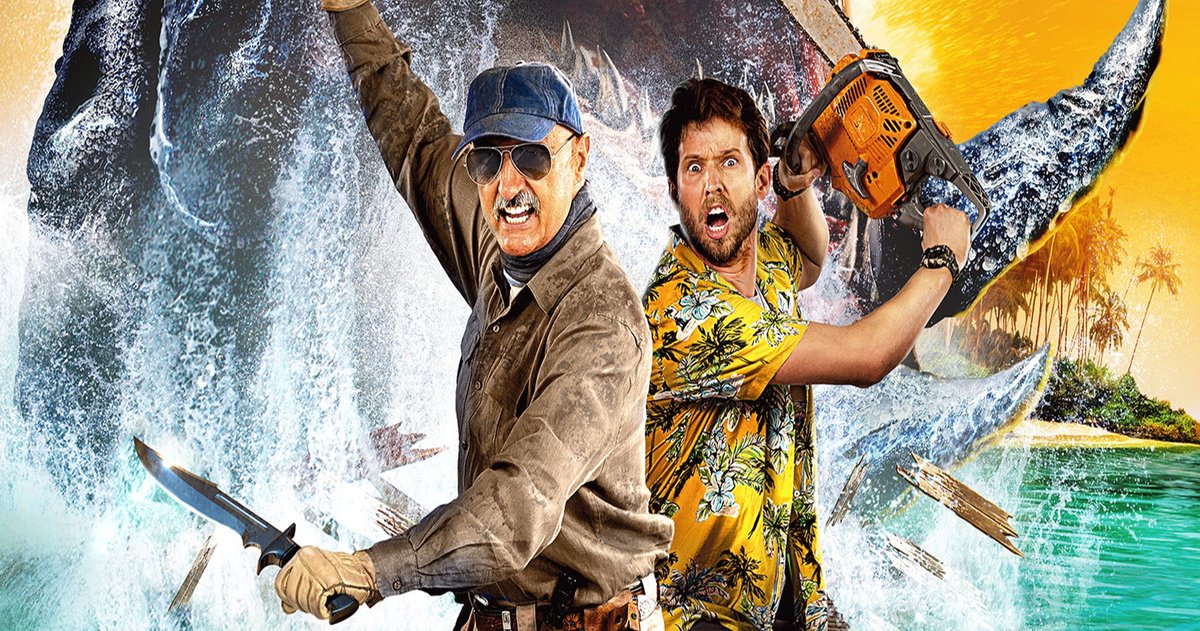 Veteran filmmaker Don Michael Paul (The Scorpion King: Book of Souls) directs the 7th installment in the long-running Tremors franchise. Michael Gross returns to play fan-favorite survivalist Burt Gummer. However, the spark of life Gross brings to the proceedings cannot elevate this drab and perfunctory monster movie that lacks the inventive spirit of the original.

On a private island, nicknamed ‘Dark Island’ in Southeast Asia, wealthy hunters track a dangerous prey, Graboids. These are large subterranean worms with snake-like tentacles. The island’s owner, the billionaire philanthropist Bill Davidson (Richard Brake), imported genetically altered Graboids. These creatures are dangerous and smarter than the ones found in Nevada.

Dark Island is adjacent to a Wildlife Preserve. At this sanctuary, head biologist Jasmine Welker (Caroline Langrishe) and her assistants, Freddie (Jackie Cruz) and Jimmy (Jon Heder), monitor and tag animals, such as elephants, with GPS trackers.

As part of its life cycle, Graboids give birth to Shriekers, blind, bi-pedal freaks that hunt by identifying a prey’s heat signature. Soon these Shriekers start attacking and eating Bill’s hunters. Once Jasmine learns of this situation, she asks Jimmy to locate the famed Graboid hunter, Burt Gummer (Michael Gross), for assistance.

Burt Gummer is currently living in exile on an island near Papa New Guinea. When Jimmy explains to him that Graboids are on the loose, Burt is reluctant to help. Still, he decides to take action when he realizes that hunting these beasts is his ultimate destiny. Also, he finds out that Jasmine Welker heads up the reserve. Jasmine is Burt’s ex-lover, and they share a son, Travis Welker (Jamie Kennedy).

Arriving at the outpost, Gummer explains the dire circumstances. The Graboids threaten the entire refuge, including endangered animals and over 800 inhabitants. Burt will need to lean on his extensive training and experience, plus a few tricks, to eradicate the Graboid menace. In addition, Burt will have to stop them without using a crucial tool, his guns.

The City of Krabi in Southern Thailand, with its glorious beaches, is a beautiful shooting location. It is another distinctive setting after previous sequels included the Arctic (Tremors: A Cold Day in Hell) and South Africa (Tremors 5: Bloodlines).

Michael Gross, at 73 years young, has to carry another Tremors sequel. Because the rest of the cast, apart from the buxom Jackie Cruz and comedic Jon Heder, is flat and unmemorable.

When it comes to Graboids and Shriekers, the absence of practical effects is unacceptable. Almost all the creature effects are computer-generated and are passable at best.

While this sequel did not have the requisite firepower like previous entries, I appreciated the extensive use of explosives, flamethrowers, knives, and machetes.

Putting the unique and colorful setting aside, Tremors: Shrieker Island needed more action. There are far too many lulls where the movie becomes a literal jungle slog. Furthermore, I would have loved to have seen either Kevin Bacon or Fred Ward appear. If this is the series’ last hurrah, having the original stars cameo would be excellent fan service.

Overall, just decent enough, Tremors: Shrieker Island is nowhere near as fun or exciting as the first two Tremors sequels (Tremors 2: Aftershocks, Tremors 3: Back to Perfection).