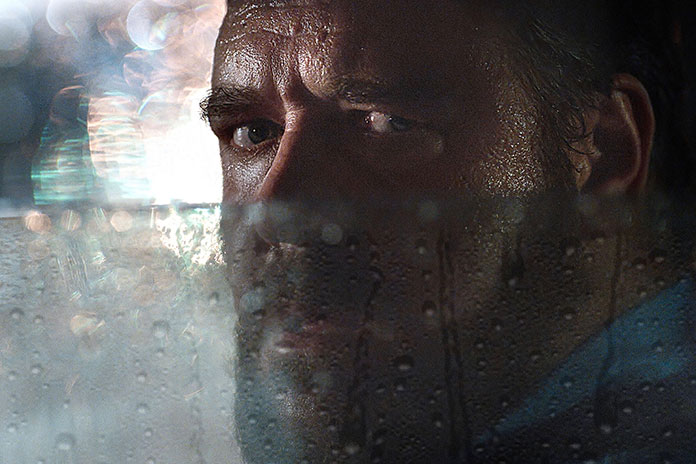 Run Time: 90 minutes
Rated: R
What to Expect: Russell Crowe is Jason Voorhees with a Driver’s License in this gory thriller.

German Director Derrick Borte eschews political messaging and delivers a violent but straightforward thriller about the dangers of road rage and psychopaths in Unhinged.

After killing his ex-wife and her new partner with a hammer and burning their house down, a heavyset bearded man called Tom Cooper (Russell Crowe), simmers with inexhaustible rage. He finds his next target in Rachel Flynn (Caren Pistorius), a newly divorced mother. Her mistake was cutting in front of Cooper’s truck when he failed to move on a green light.

Later, Cooper pulls up next to her, apologizes, but asks why she did not give him a courtesy tap. He asks for an apology from Rachel as well. When Rachel refuses, Cooper begins a campaign of terror against her to teach her a lesson. He decides to track down everyone in her life and starts murdering them one by one.

Clocking in at 81 minutes without credits, Unhinged is a short, low budget genre film that veers into horror/exploitation territory. One highlight is when Cooper stabs a lawyer friend of Rachel in the head at a crowded diner and casually strolls away.

Looking like a greasy, sweatier version of WWE wrestler Ted DiBiase (“Million Dollar Man”), Russell Crowe is in full-bore horror villain mode. He carries this movie single-handed. The last time Crowe played a bad guy like this was as SID 6.7 in Virtuosity (1995).

I thought it would be another Naomi Judd, ‘woman in jeopardy’ type movie, but I was surprised. Thanks to Russell Crowe’s strong performance, Unhinged, is just entertaining enough. If Crowe wants to transition into playing villainous roles exclusively, audiences should welcome him.

This movie is recommended for digital rental or purchase.