SEAGAL AND VINNIE JONES ALMOST HAD A REAL FIGHT | ManlyMovie

SEAGAL AND VINNIE JONES ALMOST HAD A REAL FIGHT 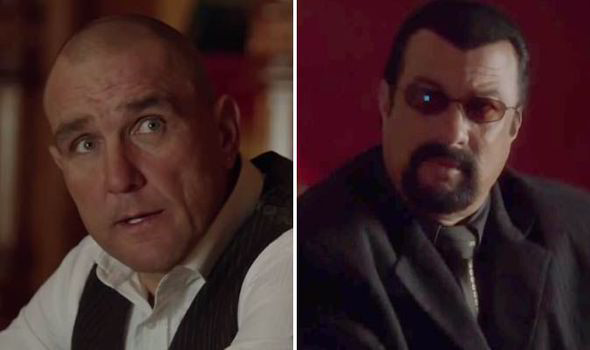 Ever seen the 2005 manly movie Submerged?  In that film, Chris Kody (Steven Seagal), the world’s best mercenary, is freed from prison — but there’s a catch. Kody must use his lethal weapons and fighting skills to stop a group of terrorists who have taken over a nuclear sub.

Vinnie Jones also starred in the movie.  And according to stuntman George Karlukovski, Seagal and Jones did not get along.  Here is what he said in an interview, via Steven-Seagal.net:

Honestly it was a damn headache, the problem is Gary is a darling, a really nice dedicated guy who shows up on time, is talented and will give you everything. Vinnie thinks he is God’s gift to fighting and Steven is well Steven…..scripts got changed at the last minute, there’s a scene where Vinnie Jones dukes it out with Seagal, punching him about, bruising him and grazing him, im working on it with Vinnie and Seagal’s stunt double Dian Hristov, then Seagal steps in and says ‘This won’t work, the audience won’t beleive he[Jones] could beat me up like that’..I ask him what he means he says ‘Exactly that it won’t work, the hero can’t get battered by someone who doesn’t know the martial arts I do’…at this point Vinnie tries to calm the storm in his Brit accent joking ‘Come on mate, I would give you a run for your money’ and Seagal looks at him like death and says ‘No you wouldn’t’..then Jones turns away disgusted and mutters *beep* under his breath.

The director steps in but the fuse has been lit…next thing we know the whole scene has been written out. Vinnie is gossiping with his other Brit co stars how he ‘can take Seagal’ and everything goes haywire, Vinnie is doing his scenes and Steven is muttering and murmuring so much the boom mike can’t pick up what he’s saying-at one point I was really afraid they would get it on for real. It would have made for a better film I tell you.

Sorry Jones, but you were out of your element.  You’re dealing with a man who ran dojos in Japan as a profession, and seen off attackers and challengers on a daily basis.  This ain’t no soccer game, mate!