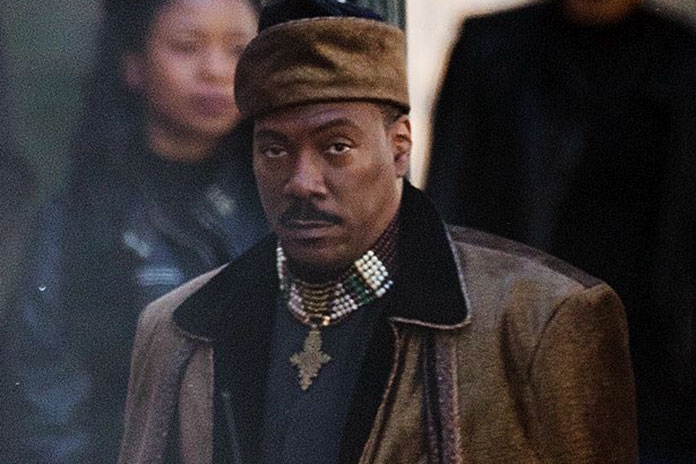 By the halfway part of this film, I’d written it off as a disaster and something worse started to happen.  I looked at it, with its crappy dick jokes and bizarre ‘Step Up’ dance routines and started to think; ‘Aw fuck, Beverly Hills Cop IV is going to be the drizzling shits’.  Eddie Murphy doesn’t care, at times, he looks to be in physical pain in this movie.  Amazon released it kind of early… to get a jump on the enemy (social media/critical skewering)?  Beware of SPOILERS.

Murphy’s Prince Akeem, it turned out, fathered a bastard during his visit to America in the 1980’s.  Fans of that classic movie will recall that Akeem did not sow any royal oats, but this plot hole is gotten around by a good old fashioned date rape joke.  Akeem was drugged by Mary Junson (Leslie Jones), who then had sex with him without consent, the act itself shown via de-aging special effects.  Side note: Why is it that when a woman rapes a man, this is the stuff of humor?  Is there any uproar yet?  I’ll not wait.  Anyway, the bastard and heir to the throne is one Lavelle Junson (Jermaine Fowler), who is brought to Paramount’s largely budget-cut indoor Zamunda, to learn to be a real prince.

The film starts out with soft, tepid humor.  No laughs are to be found, not even in the cameos from the original movie.  From there, things worsen with the ruin of Wesley Snipes’ potential, as his African dictator General Izzi is turned into something from the TV show Glee, with stupid dance/musical set pieces that really don’t belong, and miss every single attempt at comedy — something is seriously wrong when you wince every time Wesley Snipes appears, because of double-strength cringe, wanting him to go away. The film then drags into Hallmark comedy romance territory between two youngsters, complete with bush league musical score and a visibly deflated Murphy suffering to the bitter end.

James Earl Jones was told to hit the bench.  John Amos too.  Their screen time replaced with Leslie Jones, who shows enthusiasm.  But enthusiasm is not the same as being funny, especially with poor dialogue.  The film even takes a shot at itself, with the characters sharing their hatred of tacked-on sequels that nobody asked for. Not even the return of Darryl Jenks could’ve pulled the nose up on this one.

This film is garbage, we might want to start worrying about Beverly Hills Cop IV.