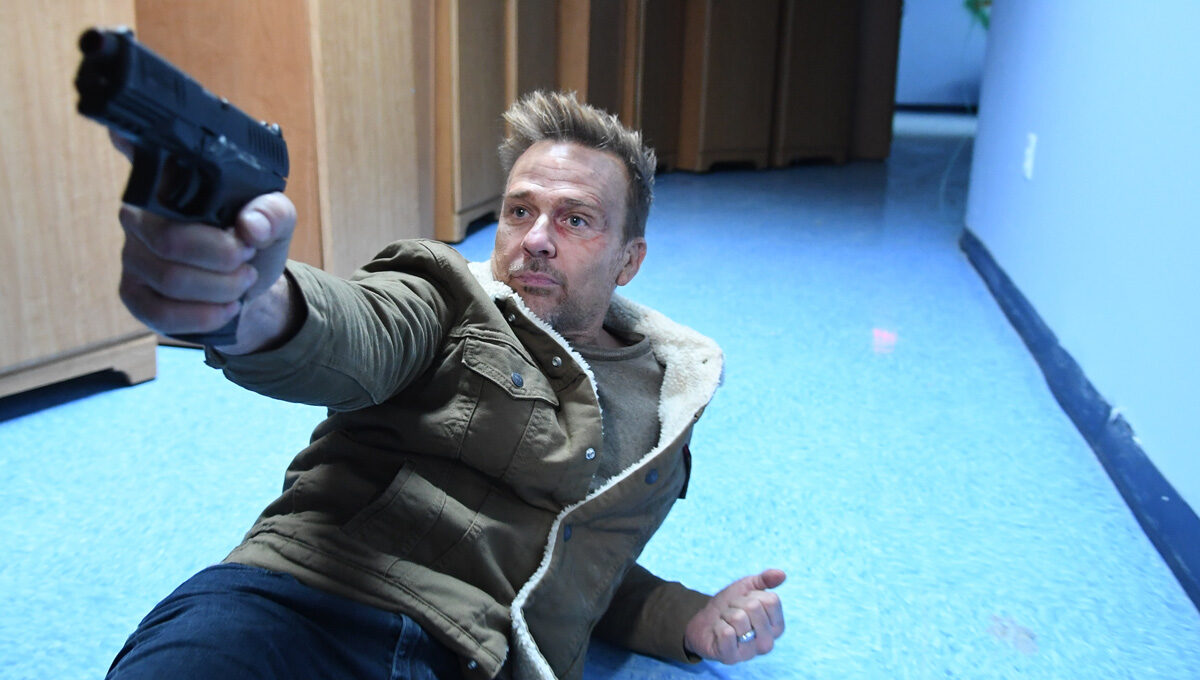 Run Time: 89 minutes
Rated:  R
What to Expect:  Action-free and amateurish. Avoid.
Christopher Douglas-Olen Ray, son of director Fred Olen Ray (The Haunting of Morella), directs the unremarkable, not well acted, lackluster action film Assault on VA-33 (2021). The film features poor photography, clumsily staged action, and some not-so-great cameos.
Jason Hill (Sean Patrick Flanery) goes to his regular counseling session at the Veterans Administration hospital. He has post-traumatic stress disorder and numerous injuries. Accompanying him to this session is his wife Jennifer (Gina Holden), who works at the hospital as a psychiatrist. After Jason’s appointment concludes, he says goodbye to his wife. Before he leaves to take his daughter to soccer practice, he notices some suspicious characters and decides to check things out. He sees the front desk receptionist acting odd and unusually careless. Alarmed, Jason soon uncovers that Russian Terrorists led by Adrian Rabikov (Weston Cage Coppola) have taken workers at the hospital hostage. Jason must use stealth to avoid being seen by the armed attackers.
These Terrorists have also taken Jennifer and General Welch (Gerald Webb), a member of the Joint Chiefs of Staff at the Defense Department, prisoner. These armed insurgents plan on ransoming the General for 50 million. Jason contacts a local Police Chief named Malone (Michael Jai White) to assist him.
Films like these make me nostalgic for the days of the Cannon Group or even PM Entertainment. Their films had entertaining actors like Richard Lynch (Invasion U.S.A.) and John P. Ryan (Death Wish 4: The Crackdown). They also had charm and practical effects. In Assault on VA-33, there are CGI bullets, fire, and blood. Why bother to make a live-action film at that point?
Sean Patrick Flanery, as Jason Hill, is tired and worn-looking, a complete non-entity who disappears in his own movie. Also, Michael Jai White gives a shockingly lousy performance and does not demonstrate his martial arts skills. Mark Dacascos and ex-wrestler Rob Van Dam show up in glorified cameos and do almost nothing. A fight between Dacascos and Flanery ends up being short and dull, a real disappointment. Van Dam, in particular, sits in a car during most of his screen time.
The rest of the movie consists of pointless filler to pad out the 89-minute runtime. One highlight comes from Weston Cage Coppola, son of Nicolas Cage. He delivers a charismatic and authentic performance. He may be a future star in the making and one to watch.
Assault on VA-33 is not recommended for digital rental or purchase.
2/10
By: John Matrix
Related ItemsAll
← Previous Story Hider In The House (1989) Review
Next Story → REVIEW: MORTAL KOMBAT (2021)