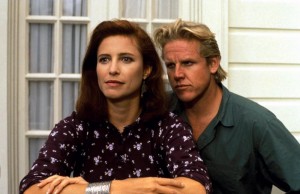 There are two ways to take this movie.  The first is to approach it as a serious thriller, which is probably not a good idea because it’s not the best thriller out there, or you can do it the other way… take it as a form of Buseyist art.  Gary Busey is a master troll, rivalled only by heavyweights like Nicolas Cage, or silent and smooth pros like Michael Keaton.  And like Michael Keaton’s troll performance in ‘Pacific Heights’, where he squats in another man’s house, Busey does something kind of similar here, hiding in someone’s attic.  It’s a premise so outrageous that it could only work if it was Busey in that attic.

At the beginning of the movie, Busey is released from the nut house, he is a man with a screw loose who killed his own parents as a child.  In an episode of massive ineptitude, the psych officers simply let the man walk out the door, offering one of the first of quite a few laughs. He soon wanders to a suburban home that is being refurbished in anticipation of a new family arrival, and while the workers leave for the day, begins constructing a secret compartment in the attic.  As the family moves in, Busey is hiding in the attic and soon begins eyeing the hot mother, Mimi Rogers.  And as Busey does not like the cut of the cheating father’s jib, he plots to oust Michael McKean and become the new man of the house.

Within seconds of first appearing on screen, Busey is full blast trolling the audience.  The maniacal laugh as he completes the door on his nuthouse attic room, or the showdown with the family dog as it smells and seeks out the fact that, y’know, a dude is hiding in the roof makes for hugely effective entertainment.  Another downright hilarious scene is when the rat fumigator arrives to initiate pest control, gassing Busey’s beloved hidden attic fort, with Busey being the figurative rat.

Eventually the movie becomes more serious and as it does so, sustains the humour as even the most blind person could not help but stand in awe of the giant, gaping and egregious plot holes.  Certain scenes just cut off completely with the cast teleporting to another area or house and you’re left wondering if entire scenes are missing.  But it’s all part of the charm.  This is a fine entry for Gary Busey fans.