Arnold Schwarzenegger is again confusing the line between court jester and politician.  Looking at his YouTube Channel, I scrolled through 30 of his most recent videos and 27 of them were political/involving political agitation.  More below were the same, but I got bored looking.

And look at the like ratios for these videos, they’re getting that awkward deep dislike mark below.  Clearly, this is not what Arnold Schwarzenegger’s fans want to see.

The latest features Schwarzenegger ranting about face masks. He had some choice words for anti-maskers on Wednesday: “screw your freedom.”

“We cannot just say, ‘I have the right to do X, Y and Z.’ When you affect other people, that is when it gets serious,” Schwarzenegger said in a CNN discussion.

“You cannot say, ‘No one is going to tell me that I’m going to stop here, that I have to stop at this traffic light here. I’m going to go right through it.’ Then you kill someone else, and then it is your doing,” he said.

Schwarzenegger then said people who don’t want to wear masks are “schmucks.”

“Yeah, you have the freedom to wear no mask. But you know something, you’re a schmuck for not wearing a mask because you’re supposed to protect the fellow members around you,” Schwarzenegger said.

Given that more than half of all people do not wear masks, Schwarzenegger is likely insulting half of his own fan base.

Schwarzenegger even has Greta Thunberg on his YouTube Channel — not what you’d expect from a man who found fame hanging out with Ronald Reagan and appearing in Reagan-era bombastic propaganda movies.  Many became fans of him because of this.  But they cannot voice their displeasure — comments were disabled on YouTube for Miss Thunberg’s sermon, which Schwarzenegger uploaded. But remember, screw your freedom.

Arnold Schwarzenegger’s YouTube Channel could’ve been the biggest thing on the site.  Can you imagine a Joe Rogan-style videocast series where Schwarzenegger discusses old movies with stogies, with guests like Sly Stallone in a smoky recording room?  It would be huge.  I would even pay for it.  Instead, we get this shit?  People indulge in movies for escapism, they don’t want extra helpings of mainstream media and opinions rammed down their throats.

Elsewhere, Schwarzenegger continues to milk The Terminator to death, using it as a propaganda tool for the German magazine Der Spiegel.  Remember folks, you’d better pay known thieves trillions in tax dollars, that you can’t afford… be cool like The Terminator. 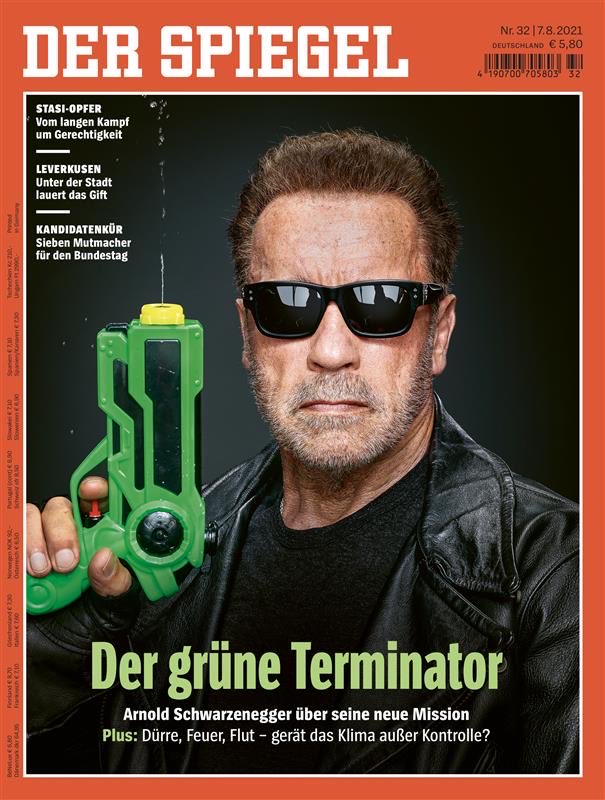