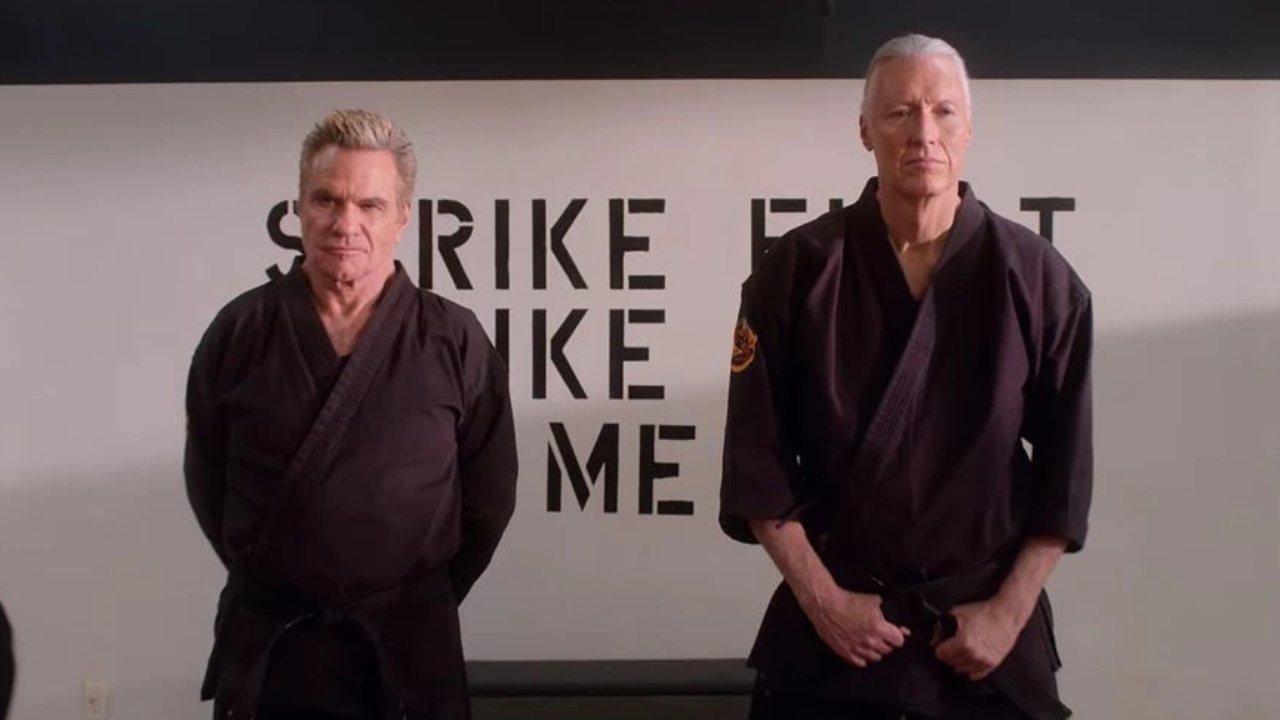 Terry Silver is back in season 4 of Cobra Kai.  It is an example of a casting move/gesture from the show’s creators and executive producers, Hayden Schlossberg, Jon Hurwitz and Josh Heald, that demonstrates that they have their ear to the ground (mostly) with respect to fan desires.  Season 1-3 of Cobra Kai were ‘quite good’, I thought, with season 4 being ‘very good’, an uncommon thing for a TV show approaching 50 episodes.  It’s like these guys have studied fan theories, fan speculations etc and deliberately incorporated them into the writing process.

At the end of season three, Sensei Kreese is back in full control of the Cobra Kai dojo.  Opposing him, a uneasy alliance of the Eagle Fang and Miyagido dojos will take he and his students on in the 51st All Valley Karate tournament, with only the winning dojo being allowed to stay in business.  Outnumbered, Sensei Kreese recruits the help of old war buddy Terry Silver, co-founder of Cobra Kai back in the day, to come into the fold and help him with the war effort.  Reluctant at first, Silver agrees… but he and Kreese soon have their own disagreements.

The star of this show is Thomas Ian Griffith, who slips back into the role of Terry Silver like he never left, from a script from men who clearly understand that the character is popular and why he is popular.  Silver is a grey area character, throughout most of the show, the creators keen to service both his status as asshole villain, but also manly fucking showman.

I fucking love how Silver shows up at LaRusso’s house, again, and presents snarky, passive aggressive threats… having so long been a smug bully, throwing his weight around, it’s immensely satisfying to see Silver put him in his place.  I also love how the season indulges in actual sizeable fan contempt for the LaRussos by presenting the car salesman’s kids as actual bullies.  For example, when a new lonely black boy shows up at school, he is bullied by LaRusso’s pissant son and friends.  And who is it who takes the boy under his wing?  Why, Sensei Silver of course!  Turning him into a manly man and a wrecking machine, though it could be argued that it was Robbie who filled this role, clearly, Silver is the one who helped earn him his first victory in front of his peers.

Silver is also presented, rightfully, as an overpowered ‘boss’, to use fighting game terminology and the writers were correct to handle him this way.  He’s funny, but we’re reminded that you don’t wanna fuck with him.  LaRusso warns of this, that the man must not be challenged in a fight.  Of course, one person does not heed the warning and is destroyed, in one of the most satisfying screen fights I’ve seen in a long time.

There are some complaints about the show though.  One that I’ve had from the start is that these producers seem bent on saturating this thing with literal busloads of nerdy 10 year olds.  They’ve done it this time again, you almost can’t keep up with how many scrawny effete child actors there are all over the screen, this is not including those returning from the previous seasons, who clearly are not fighting material in any way.  Most of them also obviously do not practice any martial arts.

This includes, by the way, even now… Ralph Machio.  All these years (decades) later and the man still hasn’t put himself out.  His fight scenes are still torturous, his agility and movements enough to make us wince.  I mean, William Zabka for instance has clearly been trained by someone.  His movements and fights look quite good.  Why can’t Machio work a little bit?

Others though have been putting the work in.  Tanner Buchanan and Jacob Bertand (Robbie and Hawk) appear to have indulged in their own martial arts training, and working out, and it shows on screen.

Anyway, there are other positives to be found.  Kreese in particular undergoes some serious character development.  Rocky IV gets called upon with a training montage and season five is teased with a cameo and a strong hint of one of the final big absent names from the franchise.  Fans have always speculated… who’d win between Mike Barnes (an apparent ally of Silver) and Chozen (now an ally of LaRusso)?  Are we going to be lavished with more fan service in season five?