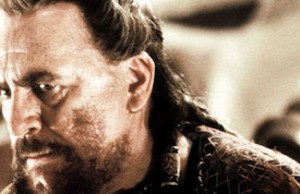 There’s a few things wrong with this film.  Namely Brad Pitt, his gay looking cousin and Orlando Bloom.  I’m not sure ancient Greece had metrosexual pop back then, but if they did, these guys would’ve been their Backstreet Boys. With Pitt being especially unconvincing as the greatest warrior the world has ever seen.  It just looks that Maximus from Gladiator could could tear through these three or so chumps without breaking a sweat, at once.  There are more things right about it. Namely Brian Cox, Brendan Gleeson and the director. You give Wolfgang Peterson a concept like this, with a budget like that, and its going to end up working. Somehow.  Especially when its conscious of the epic bloodiness of Braveheart and Gladiator.  However, it needs to be approached properly.

Y’see, the bad guys, they’re really the good guys.  Here’s a line from the movie:  “What son of a king would accept a man’s hospitality, eat his food, drink his wine, embrace him in friendship, and then steal his wife in the middle of the night?”.  And ain’t that just the fuckin’ truth?!  This, embracing the movie from the villains point of view is something that worked for me while watching Day of the Dead (1985) — where the soldiers are written as the villains, but are clearly being wronged.  Not that DOTD needed saving, that just made good movie even better.  Anyway, where Pitt and Bloom risk turning this movie into a men’s shaving advert, Cox and Gleeson fill the void with sheer manliness.  Get this:  Not only does Bloom steal Gleeson’s wife then challenge him to a duel over her, he flee’s from the fight and has his brother take Gleeson out with a sucker-move.  Then Cox cries foul, too right!  What man wouldn’t?

I knew when Wolfgang Peterson, director of Das Boot and Air Force One was going to direct this, that if nothing else, it would deliver some ballsy sandal skirmishes in front of classy backdrops.  This is like 300 without being on drugs.  The cinematography is second to none.  Scratch that, second to Gladiator.  But anyway, the scenes of battle more than just work, they leave a violent yet coherent impression.  Having said that, there’s too much focus on Pitt during these scenes.  In Gladiator, Maximus was highly dangerous yet vulnerable.  Here, Pitt is on super-hero mode, barely getting hit by anyone.  I wonder if any tantrums were thrown to get have it this way on camera.  It hurts the movie.  Not enough to kill it though.

But one question – why was Sean Bean’s role reduced to a glorified cameo?!